In the 1950's, producer/director William Castle earned himself the title "King of the Gimmicks" for stunts like rigging theater seats with mild electrical shocks for The Tingler and a skeleton which flew out over the audience (a gimmick Castle called "Emergo") in 1959's House on Haunted Hill.

Vincent Price plays eccentric millionaire Frederick Loren, who invites five guests to spend a night in a 'haunted house' for a $10,000 prize. They are each given a pistol (in coffin-shaped boxes) for 'protection.' Soon. Loren's 5th wife Annabel (Carol Ohmart) has hung herself and various guests have seen and heard things which convince them the house may actually be haunted, as its owner (Elisha Cook) has insisted all along. Of course, it turns out that the suicide was faked so that Annabel and her lover Dr. Trent (Alan Marshal) can kill Frederick. It all ends rather nastily when Frederick fakes his own death and uses a skeleton puppet to force Annabel into an acid bath in the basement.


Forty years later, Castle's daughter Terry produced a far superior remake. The 1999 version of House on Haunted Hill starred Oscar-winner Geoffrey Rush as Stephen Price (in a nod to the original's star) as the wealthy owner of a theme park company who plans a Halloween birthday party for his wife, Evelyn (X-Men's Famke Janssen). After shredding Evelyn's guest list, Stephen creates his own, which is eventually over-ridden to invite 5 apparent strangers to the party in a former asylum which was run by a the evil psychiatrist, Dr. Vannacut (genre veteran Jeffrey Combs). 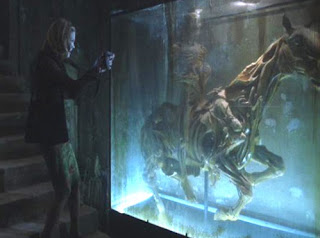 The movie starts with Price introducing his latest thrill ride to a reporter (singer Lisa Loeb) which is infact a combination of two rides at the Universal Studios Florida "Marvel Island" Attraction:


I hope you noted the appearance of a young James Marsters ("Buffy the Vampire Slayer") as the camera man. Anyway, the party guests include many future TV stars including Ali Larter ("Heroes"); Taye Diggs ("Private Practice") and Peter Gallagher ("Covert Affairs"). As it turns out, Price is indeed trying to scare his wife to death. As in the original, Evelyn fakes her death with the help of her doctor/lover (Gallagher) and then tries to drive Stephen insane. Of course, the asylum turns out to actually be haunted, as feared by the owner (SNL alum Chris Kattan in the Elisha Cook role) and the guests are all related to people who worked at the asylum when all the bad stuff in the film's prologue went down.

Director William Malone uses his cast to their fullest while setting up creepy and atmospheric scenes quite well. Don Davis' intense score - which effectively features Marilyn Manson's demonic cover of Eurythmics' "Sweet Dreams (Are Made of This)" - sets the mood quite nicely and the special effects are actually quite good.


Neither version of House on Haunted Hill is particularly frightening, though each has its merits and I certainly recommend a double-feature of the two. And by all means, avoid the sequel to the remake, Return to House on Haunted Hill, which is just a cheap attempt to cash in on what was a surprisingly successful remake.