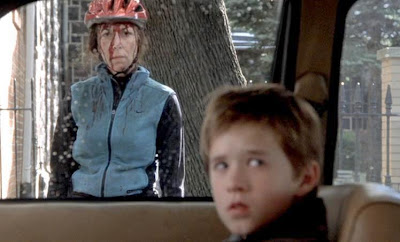 Poor Cole. He sees dead people. But you knew that. Writer/director M. Knight Shyamalan had his first big success with 1999's The Sixth Sense, a ghost story with a supposedly "surprise" plot twist at the end (more on that in a bit).

Bruce Willis plays child psychiatrist Malcolm Crowe. When Malcolm and his wife return home from an event in his honor, he is confronted  by a disturbed former patient Vincent (an emaciated Donnie Wahlberg). Vincent feels that Crowe failed him, as he still has the hallucinations that for which he sought help in the first place. Vincent shoots Crowe and then himself.

The following fall, Crowe meets a new patient, Cole Sears (Haley Joel Osment in his film debut). Cole confides the he sees dead people walking around like live people and that they terrify him. Crowe at first thinks that his new patient is suffering the same condition as Vincent and he worries he may fail him as well. Meanwhile, in the wake of his shooting, Crowe's marriage seems to be falling apart and he can't understand why can no longer get into his basement office. Eventually, he decides that Cole may be telling the truth and convinces him to talk to the dead people and help them move on. After helping several ghosts, Cole tells his mother (the excellent Toni Collette) about seeing the dead people. She finally believes him when he passes on a message from her dead mother. Satisfied that Cole is going to be okay, Crowe returns home to find his wife sleeping on the sofa. She turns over and his wedding ring rolls out of her hand, making him realize that he hasn't been wearing it along and that (here's the big twist) he is actually dead, himself.

So here's the thing, I figured out the big twist about halfway through the movie. It was the scene where Malcolm meets his wife for dinner and she completely ignores him. I turned to my companion and whispered "He's dead. No one else has spoken to him but the kid the whole time." It seemed pretty obvious to me and I was kind of shocked that other people didn't figure it out, as well. The movie is fine as a ghost stoy, without the big twist and Shyamalan coaxes a beautifully nuanced performance from both Willis and Osment and provides some good scares. But it's 'surprise' just wasn't, which really ended up kind of ruining for me. Of course, Shyamalan went on to make increasingly bad movies (Unbreakable is simply ridiculous and Lady in the Water is practically unwatchable). For a really good ghost movie released that same summer, see my previous post.