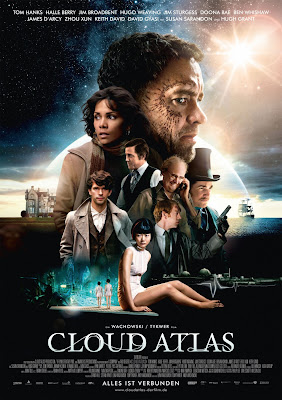 Sorry, no Ghost Movies tonight. That's because I've seen an extraordinary film and need to talk about it. As I update this review, I'm still digesting Cloud Atlas, the new film from Tom Twyker (Run Lola Run & Perfume) and the Wachowskis (The Matrix trilogy). Based on the novel by David Mitchell and adapted by the directors, Cloud Atlas is unlike any other film you've ever seen, mixing genres and periods to tell six interconnected stories over several centuries.

The plot(s) are so complex, I can only describe it/them  in the most basic of ways. In 1849, a young man journeys from the Pacific Islands to San Francisco to close a slave trading deal, while slowly being poisoned for the gold he carries; a young composer in the 1930's writes letters to his lover about his services as an amanuensis to another aging composer; a reporter finds herself caught up in a dangerous game in 1970's San Francisco; in 2012, an elderly ne'er-do-well publisher falls into a comedic trap after his ship finally comes in; a cloned waitress in 2155 'Neo-Seoul' finds herself the unlikely center of a revolution and a frightened tribesman in post-apocalyptic Hawaii aids a stranger in her attempts to save humanity from a radiation poisoned Earth, while trying to survive against cannibalistic raiders.

The truly International cast includes Tom Hanks; Halle Berry; Hugh Grant; Jim Broadbent; Hugo Weaving; Doona Bae; Jim Sturgess; Ben Wishaw; James D'Arcy; Keith David and Susan Sarandon, all of whom play at least three (and up to six) different characters; switching races, ages and genders throughout. In fact, part of the fun in watching Cloud Atlas is trying to figure who is who under some often remarkable (and occasionally terrible) makeups. Grant's old-age makeup in the contemporary story is particularly bad, though Berry's transformation into a white woman is quite startling. Personally, I was (unlike some) never offended by the racial transformations (even the less successful ones) because they made complete sense in the context of the stories and how they they related to one another. That's probably because the concepts presented actually transcend race, gender and sexuality.

Most of the performances are truly terrific here, though Hanks has some problems with a convincing Cockney accent in the contemporary story. Sturgess and Bae are quite effective in the 2155 story, while Broadbent is absolutely hilarious in the 2012 tale, though Weaving and Grant seem to be having the most fun. Weaving is best as 'Old Georgie,' the embodiment of Hanks' fears in the post-apocalyptic story, though his voice as sadistic Nurse Noakes in the 2012 story borders on Pythonesque. Grant is a very effective villain as both the operator of a nuclear power plant in the 70's and a cannibal tribal chief in the very distant future. And I dare you to figure out which male character Sarandon plays, at least until the end credits roll.

Visually, Cloud Atlas is nothing less than astounding. The directing jobs were split evenly between Twyker and the Wachowskis, with the siblings taking on the more fantastical stories (and rightly so) and Twyker dealing with the more historical ones. The scenes in 'Neo-Seoul' are staggering and the location shots in Hawaii just gorgeous. While it does take a good 20 minutes or so to get used to the way the film jumps between stories, the apparent randomness of the editing soon starts to make complete sense and the connections between the six stories becomes clearer and clearer as the film unfolds, not unlike an onion revealing its layers as it is peeled. The brilliant score by Twyker, Reinhold Heil and Johnny Klimek serves perfectly to tie the six stories of the movie together and you can be sure that I'll be adding it to my collection. While I may not personally agree with the philosophies of Mitchell's novel, I could still appreciate what he and the filmmakers had to say, here even though I found it philosophical twaddle. As much as I would like to think we're connected in the ways the novel and movie espouse, I'm much more of an "It's all pretty random" kind of guy, so I took its central message with a grain of salt, as it were. That doesn't mean I didn't have a fine time at the movies.

My companions and I all agreed that we loved this movie and need to see it again, though I understand how some critics just hated it (personally, I think those who hated it, just didn't get it). Never boring, often hilarious and always fascinating, Cloud Atlas is the kind of movie that stays with you long after you've seen it. I know I'll be thinking about it for quite some time. Truth be told, it's the best movie I've seen so far this year. Of course, there are plenty of other films yet to come this Fall. **** (Four Out of Four Stars).