Death Ain't No Way to Make a Living 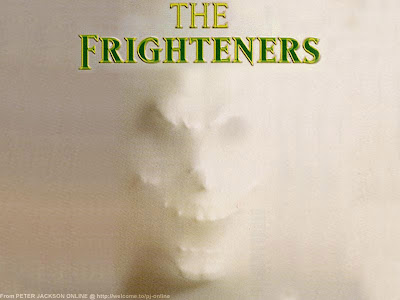 Director Peter Jackson is probably best known for his adaptations of J.R.R. Tolkien's The Lord of the Rings. Long before those films made him a household name, he made probably the best zombie comedy ever in 1992's Dead Alive (known as Braindead outside the U.S.). Jackson also made the astounding 2005 version of King Kong, which made Uncle P fall in love with the movie that made me fall in love with the movies, all over again. Jackson really made his mark with 1994's Heavenly Creatures, a mostly true story starring Kate Winslet and Melanie Lynskey as two Kiwi girls who live in a fantasy world and eventually conspire to kill the mother of Lynskey's character. The film was an International sensation and Jackson found himself invited to play with the Hollywood big boys for 1996's The Frighteners, an underrated and unappreciated ghost story starring Michael J. Fox; John Astin; Dee Wallace; Jeffrey Combs and Jake Busey. Re-edited by the studio, The Frighteners is not the film Jackson intended to make, though it deserves more praise than it received upon its realease.

Frank Bannister (Fox) develops psychic abilities after his wife is killed in an auto accident. Able to commune with the dead, he starts a business where the ghosts he knows haunt houses which he then "exorcises" for a fee. When the ghost of a serial killer (Busey) starts marking his victims, Frank and his ghost pals embark on a quest to stop the murders. Aided by Lucy, the widow of a heart-attack victim (Trini Alverado) - whose character is named after Melanie Lynskey, Frank tracks down the killer's still-living lover (Wallace) and eventually sends both of them to their just rewards, but not before dying, himself. Frank realizes that the killer was responsible for his wife's death and returns to Earth with her blessing, finding new love with Lucy and able to finally demolish the unfinished home he'd started to build while his first wife was still alive.

Hated by most critics and denounced by Jackson, The Frighteners isn't exactly a bad movie, though it's not really a good one, either. The performances are pretty solid and the FX are certainly on par with other mid-90's films, but I imagine Jackson's version was probably much scarier than the one audiences were given. I, for one, would love to see a 'Director's Cut' version of this film.