I Can See Right Through You 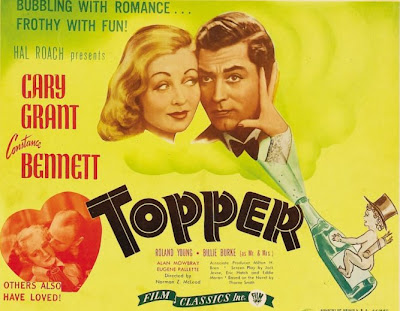 OK - not every Ghost Movie is scary. Hell, not every Horror Movie is scary and if I remember, maybe next year's Shocktober will be about Horror Comedies. But tonight (and at least one other post this month) is about a Ghost Comedy. And a pretty popular one, at that.

1937's Topper stars Cary Grant and Constance Bennett as George and Marion Kirby, a rich and irresponsible pair of partiers who only care about themselves. When they die in a car crash, they find themselves trapped on Earth until they do something selfless. Enter their friend, boring banker Cosmo Topper (Roland Young) who buys the Bennets' car at an auction, unaware that it comes with two unadvertised accessories... Cosmo's wife, Clara (Billie Burke, best known as Glinda in The Wizard of Oz) is only interested in her status among the socialites and constantly nags Cosmo about presenting himself as respectable. Realizing that freeing Topper from the stoic and fun-free life Clara expects of him may well be their ticket to Heaven, George and Marion make it their mission to enliven Topper's life. Madcap antics ensue and Topper eventually ends up arrested. Clara leaves him because of the scandal, but a near death experience for Topper (and her butler's advice to "loosen up") convince Clara that life is meant to be enjoyed and she reunites with Cosmo. Their good deed done, George and Marion are finally allowed to enter Heaven.

As in his other madcap comedies from the 30's and 40's (Bringing Up Baby* and Arsenic and Old Lace), Grant's comedic talents are on full display here. Of course, it didn't hurt that he was so handsome and debonair, qualities that helped make the absurdity of his situations all the funnier. Bennett and Burke are fine here, too but it's Young's performance as a stuffy banker who learns to enjoy life that makes Topper so enjoyable. Young provides the kind of physical comedy Steve Martin would later emulate in 1984's hilarious All of Me. Oh - and notorious gossip columnist Hedda Hopper makes an appearance as socialite Grace Stuyvesant.


Obviously, the TV remake doesn't hold a candle to the original, which is probably an excellent starting place for young film fans who want to learn about the comedies that came before most of the crappy movies they find amusing today.