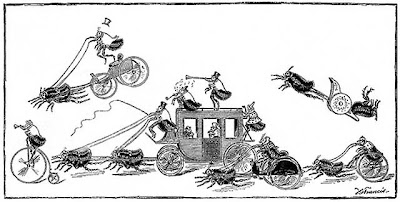 Briefly mentioned in Jurassic Park, the Flea Circus is mostly a thing of the past. Dark Roasted Blend recently featured a fabulous post about this lost art which was sometimes real, but more often a bit chicanery.
Trained fleas would be put on display, along with a variety of tiny props, giving the illusion that they (the fleas) were willingly participating in any number of "Circus" acts. In all honesty, they were merely displaying typical flea behaviors, while tethered to miniature wagons, swings, chariots and other paraphernalia. And more often than not, there were no fleas at all; merely mechanical and/or magnetic devices controlled from afar. I like to think of it as "Micro-Theatre" and like the long lost Coney island attractions of the early 20th Century, sorely wish I could have seen them in their heyday. Now I'm all itchy...

Not to be outdone, the good folks over at MatchstickMarvels.com have posted a fascinating look at a matchstick sculpture of J.R.R. Tolkien's "City of Kings," Minas Tirith, built by someone who obviously has way too much time on his hands. Check out this picture below and then click the link to see the work in progress. Impressive, geeky and very cool. 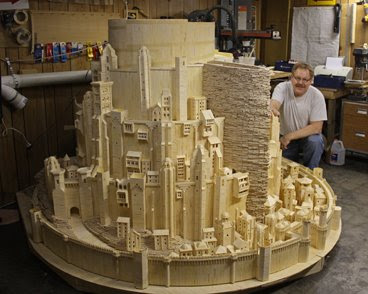 Personally, I would never have the patience (or skill) to pull of something so massive and detailed. Though the Fantasy/Sci-fi geek in me has to admit to loving it a lot. Kudos to matchstick sculptor Patrick Acton, whose models include matchstick recreations of the USS Iowa; the Spaceshuttle Challenger; the U.S. Capitol and the Titanic, all of which can be seen at his Matchstick Museum in Gladbrook, Iowa. Acton's models can also be seen in Ripley's Believe It Or Not Museums around the world.