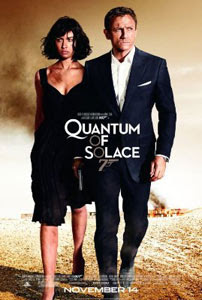 Wow! It's been so long since I've rented a movie, I almost forgot how to work my DVD player!

When it was announced that British character actor Daniel Craig was going to be the new James Bond in 2006's Casino Royale, there was a furor among Bond fans like no other. I even found myself among the non-believers. How could this short, blond, sour-faced guy be the suave MI6 spy so many of us had come to love? But the film turned out to be absolutely terrific and Craig proved the nay-sayers (myself included) wrong.
Now comes the next Bond movie, Quantum of Solace, the first ever direct sequel in the Bond series. You may remember that at the end of Casino Royale, Bond's true love, Vesper Lynd (Eva Green) was killed, though it was made to look like a suicide. Quantum picks up almost immediately where Casino left off, with Bond seeking revenge for Vesper's death. Turns out that Casino's villain, Le Chiffre, was laundering money for a secret organization with ties so deep, they literally have people everywhere, including MI6. Even M (Judy Dench) isn't safe, as her personal bodyguard of the last six years turns out to be a member of the secret cabal. So, Bond is off to Haiti, where he encounters Camille (Olga Kuryenko), who turns out to be a Bolivian Secret Service agent, seeking her own revenge on the sadistic general who murdered her parents when she was a child. Camille has hooked up with one Dominic Greene (Mathieu Almaric), a supposed environmentalist who is secretly diverting Bolivia's water supply in order to create a monopoly for his company. The plot gets too tangled to go much further, and to be honest, I'm still not sure what the secret organization (apparently called "Quantum") is, who they are or what they want. Though I suppose (and hope) that will be explored in the next film.
But, as with most Bond films, plot is secondary to action, and there is plenty of that to go around. Starting with a heart-pounding car chase through the Italian countryside and moving on to a roof-top foot chase, the action sequences are everything we've come to expect from a Bond film. There is plenty of gun play, hand-to-hand combat and even an aerial chase between a clunky old plane and a jet-fighter.
Director Marc Forster (Finding Neverland; The Kite Runner and the up-coming World War Z) handles the action well, and the script by Paul Haggis (Crash) and Neal Purvis (The World is Not Enough; Die Another Day) makes as much sense as any Bond flick, though it ends leaving more questions than it answers. Craig is terrific, baring less of his magnificent body than he did in Casino Royale, though looking worse-for-the-wear after many fight sequences and bringing a darkness to the role that previous actors may have overlooked (his Bond is more Bourne and less Brosnan). Kuryenko is fine in her 'Bond Girl' capacity, though I still miss Halle Berry's Jinx. A few other fine actors waste their time here: Dame Judy Dench, Giancarlo Giannini and Jeffrey Wright reprise their roles from Casino Royale, though I also missed Q (MI6's gadget genius), most recently played by the incomparable John Cleese. There are a few one-liners that will bring a laugh and the Bond tradition of ridiculously-named women continues with Strawberry Fields (oh, Pussy Galore, where are you?). There's even an homage to Goldfinger.
If you're a fan of the Bond series (I have been since I can remember) or a fan of outrageous action and stunt work, you'll most likely enjoy Quantum of Solace (probably the worst titled Bond film, ever). But to be honest, give me Dr. No or Goldfinger over any of the more recent Bond movies, any day. There's just something about Sean Connery's Bond that makes me weak at the knees. *** (Three out of Four Stars).
More, anon.
Prospero
Posted by Prospero at 10:56 PM