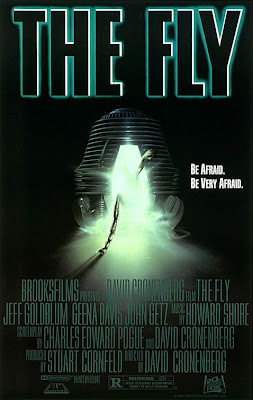 Back to fictional Horrors then, eh?
Most of director David Cronenberg's films have dealt with horrors of the flesh. Whether it's parasitic worms; the physical manifestations of hatred; gynecological torture; living video; talking insect typewriters or bio-electric implants, he seems fascinated by the horror of corrupted flesh.
And in almost no other film is that so clearly demonstrated than his 1986 remake of the 50's Sci-Fi classic, The Fly. In the original 1958 movie, David Hedison plays a scientist intent on creating a teleportation device. On his first trip through, a common housefly is trapped in the machine with him, turning him into a fly-headed monster. Cronenberg takes that premise and elevates into something else, entirely. And today marks the 25th Anniversary of its release. 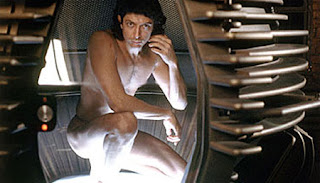 For those of you who've never seen it (and shame on you, if not), Jeff Goldblum plays Seth Brundle, a scientist whose severe travel sickness drives him invent a teleportation device and Geena Davis is Veronica Quaife, a reporter for a science magazine who thinks Brundle's crazy, until he demonstrates the machine for her. What starts as a professional relationship soon turns romantic and after a night of lovemaking, Seth realizes he needs to teach his machine about flesh. After successfully transporting a baboon, Seth decides to take the trip himself. As in the original, a fly is trapped in the telepod with him. But instead of creating a man with a fly's head and arm, the machine combines their DNA and creates something very different. Suddenly stronger and more aggressive (and craving sugar), Seth begins to mutate. As his "disease" progresses, his mind devolves and his relationship with Veronica deteriorates. In the film's most heartbreaking scene, Veronica visits Seth one last time, where his ramblings and appearance are too much and she flees. 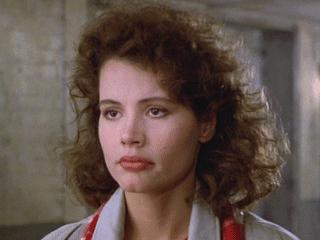 Soon, Veronica discovers she is pregnant with Seth's baby and decides to have an abortion. But Seth kidnaps her before she can and as the last vestiges of his humanity slip away, he attempts to combine the DNA of Ronnie, their baby and himself in order to effect a cure. Ronnie's douche bag boss (John Getz) comes in at the last minute to save her, and the resulting Brundlefly/Telepod monstrosity begs her to kill him in one of the most intensely emotional endings of any Science Fiction film ever made.
Goldberg and Davis both give astonishing performances in The Fly, adding to the tragedy unfolding as the movie progresses (and it helps that Goldberg was at the height of his physical prowess). The fact that they were both overlooked come awards season is criminal and evidence of the various Academies general indifference to Horror and Sci-Fi. Howard Shore's score is the perfect compliment to the tragic horror and the supporting cast (which includes a cameo by Cronenberg as an OBGYN in a dream sequence) is terrific. The Oscar and Saturn award winning effects by Chris Walas are intense and gross and wonderful.

The movie has struck such a chord in popular culture, that Shore wrote an opera along with playwright David Henry Hwang (M. Butterfly - which Cronenberg also adapted into a film). It premiered in Paris in July 2008 and was subsequently performed by the Los Angeles Opera in September of the same year. 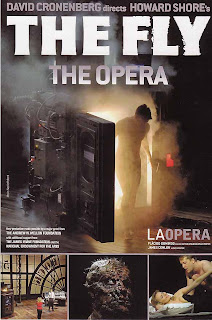 Even with today's CGI and 3D technologies, I dare you to find a more effective, disturbing and heart-wrenching Sci-Fi/Horror movie. 25 years later and the movie still holds up, evoking both emotional responses to its tragic romance and visceral responses to its gross-out special effects.
Cronenberg has recently talked about remaking the movie again, using modern SFX technology, though I doubt he'd be able to recreate the emotional intensity of his 1986 masterpiece.
More, anon.
Prospero
Posted by Prospero at 11:24 PM