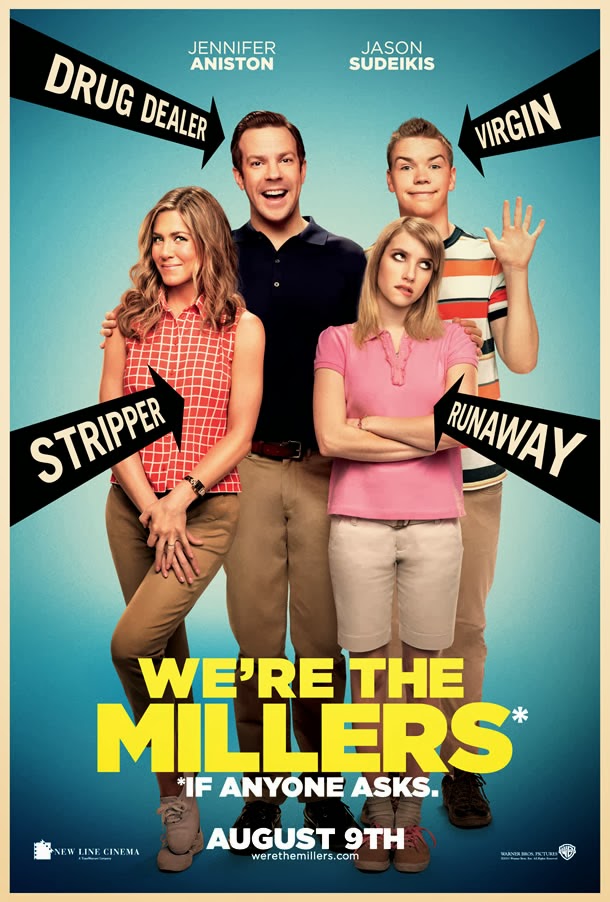 I wasn't sure if I was going to post about Groundhog Day or write this review... And I did my best to come up with a way to tie the two together, but couldn't find any rational correlation between the two other than that both Groundhog Day and We're the Millers are comedies.

Michael joined me for dinner and an OnDemand movie Friday night and since we were both in the mood for some nonsense, we watched this past summer's weirdly sentimental caper comedy which turned out to be actually much funnier than the numbers said it should have been. A preposterous plot? Most certainly. Gross-outs; sex jokes; stereotypes; outrageous coincidences and Carny trash? Of course! There is nothing particularly original or unexpected about the script from Bob Fisher and Steve Faber (The Wedding Crashers) or Rawson Marshall Thurber's (Dodgeball) direction. Luckily, Thurber managed to to pull together a cast capable of pulling off this particular brand of nonsense with ease and style.

SNl alum Jason Sudekis is Dave Clark, a slacker pot dealer who is content with his life and has his business down to a science. Jennifer Aniston (in another surprisingly good performance) is his neighbor Rose, a stripper at the end of her financial rope. When dorky neighbor Kenny (Will Poulter) involves Dave in a dispute with a bunch of thugs and street urchin Casey (Emma Roberts) he ends up with both is stash and cash stolen and owing over $40 Grand to his supplier, the innocuously named but ruthless Brad (Ed Helms). In order or make up for it Brad sends Dave to Mexico to pick up "a smidgen and half" of pot. In order to keep under the radar, Dave enlists Rose, Kenny and Casey to pretend to be an average family on an RV trip. Throughout the outrageous road trip (which includes an exceptionally funny encounter with a sexually adventurous DEA agent and his wife - hilariously played Nick Offerman and and Katherine Hahn) and a male genitals visual involving a tarantula bite that is almost as disturbing as the zipper scene in There's Something About Mary, the four forge a very unlikely bond. It's no spoiler here to say the Millers end up together as a very real (though oddly dysfunctional) family. Stupid, ridiculous and not at all for the prudish. We're the Millers is well worth the watching, especially with the right person, under the right conditions. And I must admit, this gay man isn't afraid to say that bad actress or not, Aniston is smoking hot in this movie! It was exactly the kind of nonsense I needed after the week I've had!

We're the Millers is rated 'R' for drug references, sexual situations, adult language and violence. **1/2 (Two and a Half Out Of Four Stars).

And since it is Groundhog Day, that rotten Marmota monax had better not see it's shadow this morning. I have no problem driving out to Punxatawney to wring that rodent's neck! Not one, but two snowstorms are predicted for this region in the coming week. While I have no intention of moving any time soon, retirement in Taos is looking more and more attractive.

More, anon.
Prospero
Posted by Prospero at 1:46 AM