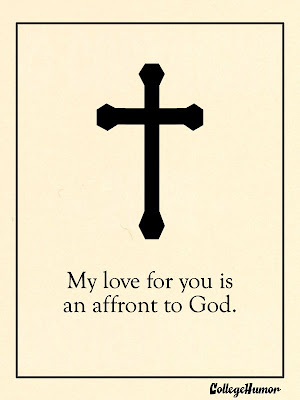 So... Today was Valentine's Day. You'll notice they've taken the "Saint" out of the holiday. Valentine was supposedly a Christian martyr who may have, among many other myths, performed illegal Christian marriages. His remains are reportedly interred in Ireland. Most modern, right-wing Christians don't really think about the time when being a Christian was punishable by death under Roman law. Or if they do, they certainly don't equate that persecution with their persecution of modern minorities.

The image on the right is from a series of "Puritan Valentines" posted on CollegeHumor.com, though it certainly expresses the opinion of the happily dwindling number of people in the U.S. who think I and others like me are evil; possessed; mentally ill; morally bankrupt; perverted; unnatural; hell-bound; filthy; sick or otherwise corrupted.

People complain that Valentine's Day is a "Hallmark Holiday," concocted by the Greeting Card; Jewelry; Floral and Candy Industries to drive sales in early spring, after having drained consumers' wallets just two months prior.. Having spent my fair share of time working in many aspects of retail, I can assure you that this is partially true. Still, there is something exhilarating about romantic love and the idea of a 'soul mate.' While T and I exchanged Valentine's texts (his was particularly sweet) and talked tonight,  I can't exactly say we're each other's 'Valentines.' Not yet, any way.

As for the Day Job's 'Red Food Party' today, everyone laughed along with Uncle P and "The Tale of the Wrong Spice." I promised to make them correctly for next month's 'Green Food Party' (remind me to buy green food coloring).

If you had hot, romantic fun times with your Valentine today/tonight, go you! If not, here are some goats that sort of sound like people: