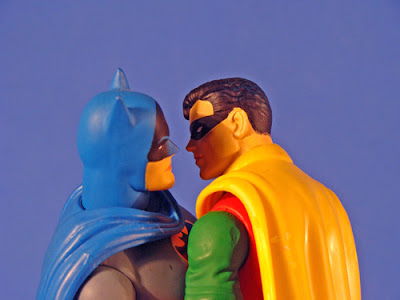 Personally, I have never attended (and don't really hope to do so) a kiki. Made popular by the Scissor Sisters' single Let's Have a Kiki (link may contain NSFW content), a kiki is a small, impromptu party with close friends, or something. There may be catwalk modelling involved. Or Ecstasy. Something.


So, in case I haven't mentioned it before, part of my not-so-secret geekery includes Super Heroes. I'm a DC kid (though Spider-Man was fun). I think it had to do with the characters' secret identities. In public, I'm an upstanding, everyday citizen (except for the billionaire part, of course). Behind a mask, I get to wear tights and a cape and express who I really am. Gee -- I wonder why gay kids identify with Super Heroes?


As a child, I was Batman for Halloween 3 years in a row. I used to tie a towel around my neck and ride by "Batcycle" (really a Schwinn "Pea-Picker" with a banana seat; wide handle bars and a sissy-bar for a passenger) down the street, singing "Nah-nah-nah-nah-nah-nah-nah-nah..." And no, I am hardly ashamed to admit this. Many of you know you did something similar.

There's certainly nothing new about the homoerotic connotations in the relationship between Bruce Wayne/Batman and Dick Grayson/Robin. They sleep in the same bed, for eff's sake! And there's tons of fan art imagining much more going on between the hero and his sidekick.

Of course, comedian Jonny McGovern has his own ideas about Batman; his voice and what he's like when drinks too much (language NSFW):


There are rumors that Warner/DC's announced 2015 Justice League film is in trouble. The latest script is supposed to be a disaster and not a single actor has been signed. Personally, I think we'll need a Wonder Woman movie and a Flash movie, first. And a Green Lantern sequel that isn't a mess of ideas without anything to really tie them all together. And really, why hasn't there been a Wonder Woman movie, already? Sheesh!