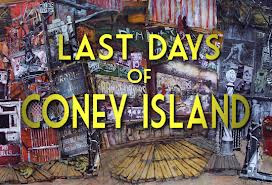 As a kid, Uncle P's Mother spent part of her summer vacations with her grandmother at Coney Island. I heard stories about the Steeplechase; the Shoot the Chutes (a precursor to today's "Log Flume" rides) and of course, the Cyclone rollercoaster. Of course, the only thing that really remains today is the Cyclone (the Wonder Wheel came much later).

As someone who has a mild obsession with coasters and theme parks, I imagined a romanticized version of Coney Island that I would never get to see. Of course, the Internet came along and I discovered hundreds of images, stories and details about Coney Island in its heyday in the early 20th Century. I even started to write (and may yet finish) a musical called Luna Park, about Coney's most fabled amusement park which burned down on August 12, 1944. Coney Island (like much of Brooklyn) has experienced a renaissance of sorts and a new Luna Park has opened in recent years (long-time readers will remember my birthday trip there, a few years ago).

So I was fascinated to learn that animator Ralph Bakshi (best known for the X-rated Fritz the Cat; the first film version of The Lord of the Rings and the live-action/animated combo movie Cool World with Brad Pitt) has created a Kickstarter page to finance Last Days of Coney Island. Set in the early 1960's Last Days... is a series of animated shorts about the decline of the once-glamorous vacation spot and the people who inhabited it.

Personally, Bakshi's films have always been hit-or-miss. One of the last 2D animators working in the feature film industry, Bakshi always has some interesting ideas, even of his films don't always hit the mark. So I was delighted when the Happy Mutants at BoingBoing posted Bakshi's Kickstarter video plea for funding of Last Days of Coney Island.

I do hope Bakshi gets funding to make this film. 2D animation is going away, and it makes me sad. Even Disney incorporates CG animation in their 2D films these days. A cool, successful, experimental 2D animated movie may just be what some young animator needs to inspire new works in this dying art form.

Uncle P is also hoping to have his own Kickstarter page by the end of the year; first to raise money for a trailer for Army of the Dead and eventually full funding to shoot the feature. I recently enlisted the help of a fellow actor, friend and graphic artist to create some storyboards for the page. You know I'll be keeping you posted.