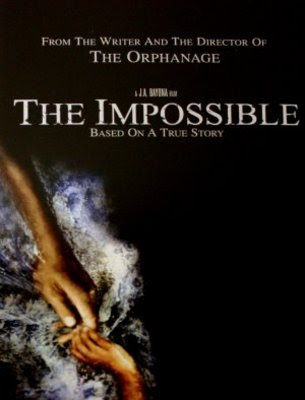 I can't begin to imagine the horrors suffered by the people who both died and survived the 2004 Indian Ocean tsunami. I remember feeling hopeless and helpless as I watched video of tourists and natives in Indonesia being swept away in one of the worst natural disasters in recorded history. Over 220,000 lives were lost in Indonesia; Sri Lanka; India; Thailand and the surrounding island nations. Among many others, openly gay American Interior Designer Nate Berkus lost his life partner, Fernando Bengoechea in Sri Lanka during the event.
Screenwriter Sergio G. Sanchez and director Juan Antonio Bayona (both best known for the excellent 2007 Spanish-language horror film The Orphanage), have collaborated again to tell the story of one family affected by the tsunami in the upcoming film The Impossible.
I first saw the trailer I am about to share the day before yesterday and found myself weeping almost uncontrollably within the first few minutes. Ewan McGregor (I Love You, Philip Morris; Moulin Rouge); Naomi Watts (Mulholland Dr.; King Kong) and Geraldine Chaplin star in this true account of one family caught up in a truly horrific event.

Director Clint Eastwood briefly visited this theme with his 2010 supernatural drama Hereafter and the tsunami scene in that film was devastating.

Watching the trailer for The Impossible a second time still has me sobbing like child. I don't know what seeing the actual film will do to me, but I know that I MUST see it. The Impossible is scheduled for release in the U.S. in December. Watch both of those clips in Full Screen for the fullest effect, though I can't promise you won't be profoundly affected by them. I was and am.
More, anon.
Prospero
Posted by Prospero at 11:20 PM