My Head Will Explode 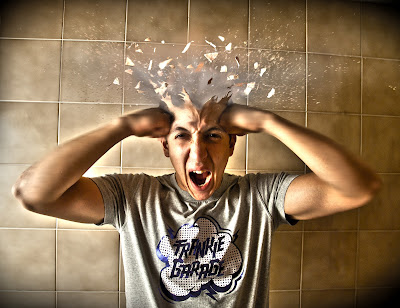 I was going to write about the RNC tonight but I realized that if I did, my head would literally explode from their lies and hatred of women and gays. Subjugation of those one deems weaker than you has historically proven to be a winning policy. It worked particularly well during the dark ages, when only the clergy and the royals could read. Of course, women and gays no longer see themselves as weaker than the bullies who would make us 'less than' and they are now running scared and using every deceitful tactic they can to deny us rights.It's nothing less than disgusting. So much so, that I avoided tonight's coverage of the RNC in order to keep my dinner down.
Seriously, it is my hope that no woman is ever raped. But I really hope that no GOP-supporting woman ends up pregnant from a rape or forced incest. Can you imagine being compelled by law to spend nine months living with a reminder of the horrors and degradation of that event? Not to mention knowing that the rapist would have full parental rights to the child he fathered? I can only think that some Repugnican a-hole has secretly lobotomized the women who would support such a platform. Can you explain why any woman would support this? I don't know a single one who would.
And as for Marriage Equality - well, we've all seen how Argentina, Belgium, Canada, Denmark, Iceland, The Netherlands, Norway, Portugal, Spain, South Africa, and Sweden have all fallen into the depths of the abyss because of they allow men to marry men and women to marry women. It's such a shame that those countries have been subsumed into the fiery depths of hell. Wait... what? They haven't? Shocking!
Why is it any politician's business who I love? Why is it any politician's business whether a woman chooses to have a baby they ca't support and do not want? Why is it any politician's business how I (or any of us) live the life that the U.S. Constitution guarantees we live it? Those sentences may not be grammatically correct, but I'll be damned if I'll let some rich, government fat-cat tell me how I can or cannot live my life.
I know I'm probably 'preaching to choir' here, but the choice for any sane, rational human being is clear. Let our current President finish the job of cleaning up the mess left to him by a complete idiot, or allow Twit Romney and Paul Moron to run slipshod over the Constitution. That odd, buzzing sound you hear? It's Lincoln, furiously spinning in his grave because the party he once led has now become a bunch of hateful bigots.
I can't promise this will be my last post on this subject. In fact, I can almost assure it won't be. But until the current, ultra-right GOP is laid to rest, I will not be silent. And nor should you.