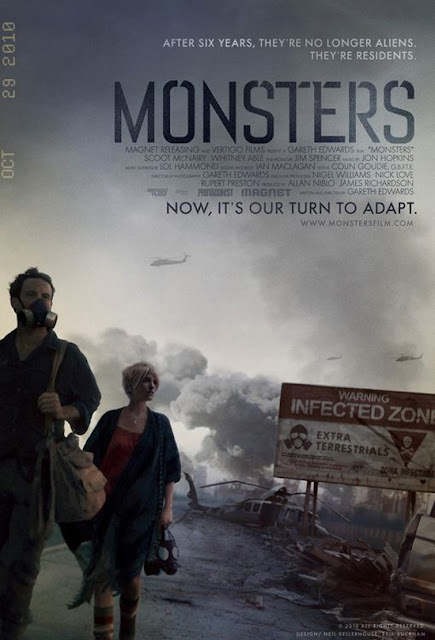 Sometimes an independent film I really want to see plays in such limited release, I never get to see it here in the wilds of suburbia. Thankfully, cable is changing that for me. Such is the case with writer/director Gareth Edwards' 2010 Monsters. a film I've read a lot about, but didn't get to see until tonight.
Monsters takes up six years after a space probe crash-lands in Mexico, bringing back an alien life form which takes over most of the country, turning it into an "Infected Zone." Each year sees a dangerous alien migration which prompts airstrikes by both the U.S. and Mexican Airforces and has caused the U.S. to erect a gigantic wall along the Mexican border.
When Sam (Whitney Able) is injured in an attack in El Salvador, her wealthy publisher father sends Andrew (Scoot McNairy), one of his photographers, to escort her home. The night before Sam is scheduled to leave on the last ferry of the season, Andrew gets very drunk and loses Sam's passport and the $5,000.00 ferry ticket to a woman whose face we never see. With no other choice but to travel through the Infected Zone, the pair make their way back to America via riverboat and on foot.
What follows is not a typical alien monster movie, but rather an often frightening character study of two very different people who, forced by often horrific circumstances, end up bonding in a surprising way. Sam, apparently engaged to a man she doesn't love, wants only to get home. Andrew, who desperately wants to capture a living alien on film, has a young son who doesn't know he's his father. McNairy (probably best known as Noel on TV's "Bones") and the gorgeous Able (the as-yet-to-be-released-in-the-U.S. All the Boys Love Mandy Lane) give lovely, subtle performances as two strangers who bond under extraordinary circumstances. Edwards, on tap to direct the upcoming Godzilla reboot, has crafted a very likeable film, eschewing massive effects work for rather intimate story-telling, albeit in some exotic locales. The effects, also by Edwards, are both creepy and beautiful, especially in the movie's final scene. Edwards' script, which comments on loads of topics (including the current debate on illegal immigration) is smart and poignant, with enough creepy scares to keep it interesting.
The monsters in Monsters, best described as electric scorpion/octopus combinations, are actually few and far-between. When we do see them, it is usually from a distance or at night, where we merely catch glimpses of gigantic legs and tentacles. But this movie is much more about two people on a journey, rather than giant, destructive beasties on a rampage. If you're looking for giant, destructive beasties on the rampage, then Monsters is probably not for you. If you want interesting characters thrown together by extraordinary circumstances, you should see Monsters. *** (Three Stars out of Four). Monsters is currently playing on Showtime Extreme.

I'm glad I finally got to see this movie and am now very interested to see Edwards' take on the most famous kaiju monster of all.
More, anon.
Prospero
Posted by Prospero at 11:20 PM