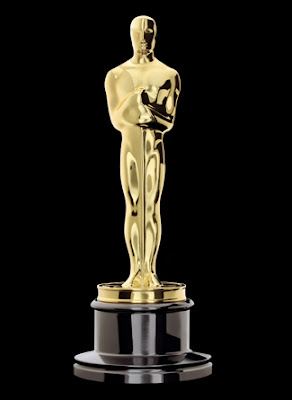 So once again we were 'treated' to a boring and predictable Oscar broadcast in which the only surprise was Meryl Streep winning Best Actress for The Iron Lady. Billy Crystal did his best, I suppose, though the aging comedian was a rather safe choice to host. For the record, I didn't hate last year's hosts (Anne Hathaway and James Franco) as much as some people did. And I always hate "safe." I loved the "Focus Group" bit about The Wizard of Oz, starring Bob Balaban; Christopher Guest; Eugene Levy; Fred Willard; Catherine O'Hara and Jennifer Coolidge.
Even the appearance by my obsession, Cirque du Soleil (which promised 'original music' by Danny Elfman) was a disappointment. Too short and using music recycled from Iris (the show in permanent residence at the Kodak Theatre), it just didn't have the "Wow Factor" I've come to expect from them.
Yes, Christopher Plummer gave a very amusing acceptance speech, though both Martin Scorcese and his amazing film Hugo, were robbed of the awards they deserved.
I gave up on the show about 2/3 of the way through (as usual); went on Facebook and visited my usual sites; then came here to post my thoughts about the very safe and rather boring (as it has been for the last 20 years) Oscars telecast.
The red carpet was interesting, at least, Gwyneth Paltrow looked amazing in that white cape, while Michelle Williams looked ridiculous in a very silly dress people seemed to adore for some reason. And while Jennifer Lopez' left nipple seemed to want to escape the confines of her dress, Angelina Jolie was stunning, as always (though I wish Brad Pitt would show up with washed hair, for once).
Honestly, I miss the Oscars of old, where streakers ran across the stage and fake Native Americans declined awards on behalf of pretentious fading stars while young up-and-comers tied with aging biddies for Best Actress.
Or maybe I'm just too old and jaded to care anymore...
More, anon.
Prospero
Posted by Prospero at 11:32 PM

That focus group bit was great. I thought the acrobats were fantastic and unexpected. The pre-filmed segments as in Billy Crystal and George Clooney kissing were well-done and very clever. Brad Pitt is so annoyingly too casual and yes, he damn-well should get rid of the gross facial hair and grow up and get a decent haircut. The messy and stringy Willy Nelson look is getting old on him. Is he too cool to try a little harder??? I don't see the big deal about Angelina Jolie with those puffer-fish lips in ugly red and sickly white skin and chicken bone arms. . Meryl looked wonderful as did George's gf Stacey in that gorgeous gold gown. So many women are better and healthier looking than Angelina. I liked the show.

I really liked the show. It was quite good.

This is about The walking Dead and don't worry about spoilers.

How long did they have the kid with the bad leg - I would think it would take weeks to heal well enough that he could walk again. I ask because during his time with them, no one saw him, fed him, listened to him or asked him questions???

Where are all the dogs, cats and other animals? Deer and rabbits should have exploding populations - even if the WD are eating them.

I always like them, but I felt that was sad for Meryl Streep to finally get a 3rd Oscar, for not-so-good film but losing for THE DEVIL WEARS PRADA.

I thought the show was a bore and Crystal was blah - and botoxed and bloated to an inch of his life.

I like Streep's acceptance speech and I don't begrudge her first win in 29 years! Some people would assume she wins annually.

...and anytime I can see Jean Dujardin is ok with me.