Egg On My Face 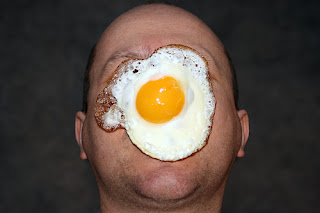 So, last night I took another website's news as true and posted about Joseph Gordon Levitt's reported role as Alberto "Holiday" Falcone in The Dark Knight Rises, Christopher Nolan's third (and supposedly final) entry in Warner Batman franchise.
Well, it turns out (according to Entertainment Weekly) that this information was wrong. EW.com is reporting that JGL is in fact, not playing Holiday in the upcoming threequel. So, what role might he actually be playing?
Personally, I think Joe would be perfect as The Riddler, but that wouldn't tie up the trilogy in the way Nolan has already expressed he'd like to do. Of course, Marion Cotillard as Talia al Ghul would go a long toward that end. Still, I'm left to wonder what part the talented young Levitt might actually be playing in the film. Robin? Unlikely, considering that Nolan has often expressed his disdain for the character.
Of course, there's Anarky, a child-prodigy intent on over-throwing the government. And Firefly, the pyromaniac orphan. Or any number of villains in the DC pantheon... Personally, I don't really care who he's playing in the film, as long as he's in it. Levitt has been a favorite of mine ever since he made a name for himself as Tommy on the hilarious alien sitcom, "3rd Rock from the Sun" where he held his own amongst the likes of Jane Curtain and the incomparable John Lithgow (who just tonight had a brilliant appearance as Barney's father on CBS' "How I Met Your Mother").

Hesher co-stars Black Swan's  Natalie Portman, Rainn Wilson and Carrie's mom, Piper Laurie. It looks... interesting, if nothing else. I'll probably catch it On Demand. And as soon as I know what role Levitt is actually playing in The Dark Knight Rises, I'll share with all of you.
More, anon.
Prospero
Posted by Prospero at 11:58 PM