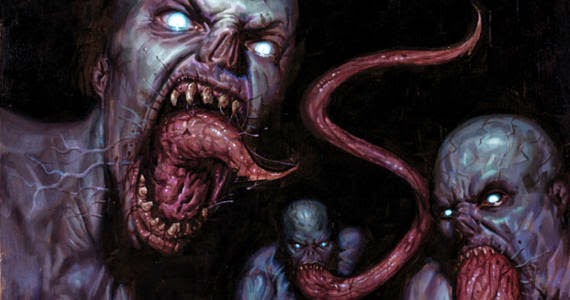 Director Guillermo del Toro and writer Chuck Hogan came up with their own twist on vampire mythology in their trilogy of novels "The Strain," "The Fall" and "The Night Eternal." The first novel pays homage to Bram Stoker's "Dracula," substituting a plane for ship Demeter, but later delves into epidemiology; the logistics of plague and the spread of disease using one of horror's oldest tropes, the vampire. The cable channel FX has developed the trilogy into a TV series, with Del Toro and Hogan at them helm, assuring audiences that the series will be at least as good as (if not better) than their novels.

Hottie Cory Stoll ("House of Cards;" The Normal Heart) is CDC doctor Ephraim Goodweather, who is brought in when a plane from Austria arrives at JFK "dead." All equipment is off, all the lights are out and all but one window shade is closed. Of the 210 people aboard, only four are alive, though by the end of the first episode, it is clear that none of them are 'dead.' Eph is also in the midst of a custody case over his young son, Zach, which serves as both a distraction from his work and a stress-factor in life. Meanwhile, aged pawn-shop owner Abraham Setrakian (Harry Potter's Argus Filch, AKA, David Bradley) knows that an old enemy has come to America and is determined to stop him, at any cost,

Drawing on classical vampire mythology. "The Strain" adds virology to the mix, adding an intriguing (and often disgusting) element to the genre. Del Toro has directed the first three episodes and written (along with Hogan and others) the first 7, staying close (so far) to novels' plot, while adding and/or subtracting for TV audiences. The cast, which includes Sean Astin; Kevin Durand ("Lost's" Keamy) and several other TV vets, seems well up to the task at hand. And the effects are downright disturbing. Blood-sucking worms and supernormally fast & strong creatures are abundant, while subtler motifs ("Papa. I am so cold") abound. Two episodes in and I am totally hooked. Hopefully, the series will not totally rely on all three of the novels, the second and third of which left much to be desired. So far, though, the series is excellent! ***1/2 (Three and a Half Stars Out of Four).