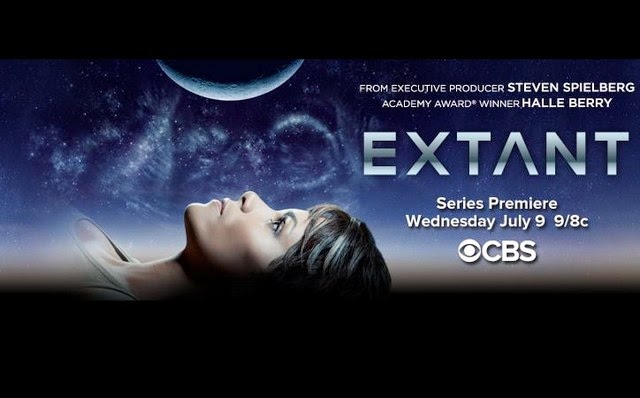 I don't usually review new TV series until after at least two episodes, but I was so intrigued by the trailers for CBS's new Sci-Fi drama "Extant" and so taken by so much of it (some of it, not so much, but we'll get to to that in a bit). Spoilers ahead.

It's the not too distant future. Technology is obviously advanced and it seems the world is run by tablets. Halle Berry makes her small-screen debut as astronaut Molly Woods, who has just returned home after a 13 month solo mission aboard a space station. Solo? Isn't that a bit dangerous? What if something were to go wrong? Oh, well. Screw logic. Her gorgeous husband John ("E.R." alum Goran Visnjic) is happy to have her home, but their obviously not biological son Ethan is suspicious and knows something's off. Wait... what? Ethan is a robot? Okay, sure. Whatever. It had better be germane. On the same day John is presenting Ethan to a group of investors, Molly finds out that she's pregnant. (Dun-dun-DAH!!). And while John is earnest in what he wants to do, can he really be surprised that no one wants to invest in an artificial intelligence that doesn't follow Asimov's Rules (or at least have a kill switch). Weird things happen: Space exploration is now privately funded The International Space Exploration Agency is run by a nefarious Japanese investor who is obviously up to no good and Ethan throws a temper tantrum, after which he may or may not have killed a bird. So, let's take parts of The Astronaut's Wife; Rosemary's Baby; Alien; and A.I., mix 'em all up with a dash of Starman and a pinch of "The X-Files" and you have "Extant."

Not that it was terrible. There were some cinema-worthy effects in the pilot and some genuine performances from Berry and the supporting cast of TV regulars, including Camryn Manheim; Michael O'Neil ("Bates Motel"); Maury Sterling and Brad Byer. TV Sci-Fi is hit or miss, and this rather obvious-starting show had better have some tricks and amazing plot-twists up it's sleeve because despite the excellent cast, the pilot was so full of cliches, plot-holes and red-herrings I actually groaned more than once. I will give "Extant" a chance, but it had better find somewhere new to go, real fast. **(Two Out of Four Stars).