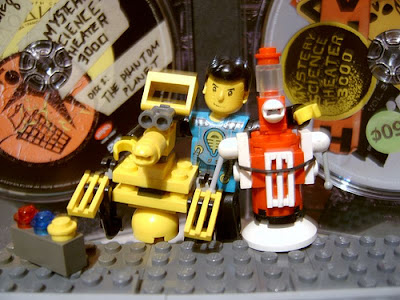 Nope, LEGO versions of Joel and the Bots just don't do it. Over its 10 year run on Comedy Central and Sci-Fi (long before it was SyFy), "Mystery Science Theatre 3000" entertained me and my friends with some of the snarkiest, silliest most outrageous and often very obscure comedic references ever.

The premise revolved around an ordinary human (Joel Hodgson and later, Mike Nelson) trapped aboard a space station with four robots (Cambot; Gypsy; Tom Servo and Crow T. Robot) who is forced to watch bad movies as part of an evil experiment. Joel, Mike, Tom and Crow would then spend the next two hours making fun of the movie (and sometimes shorts) they were watching with more-often-than-not hilarious results. If you are a fan, you know how brilliant the show could be. If you aren't familiar, go to YouTube (after you finish reading this post) and watch it!

I know I've blogged about this show before, but the lunatics at Io9 recently posted "The 15 Most Disturbing Host MST3K Segments" and it got me nostalgic for both the 90's and the show.

Here are just a few of my favorite clips, bits, movies and segments:


And here's a fan-made MST version of Twilight:

While the idea lives on at RiffTrax and the gang occasionally does live events broadcast to movie theaters nationwide, it's just not the same. Someone bring this show back, please!

More, anon
Prospero
Posted by Prospero at 12:28 AM