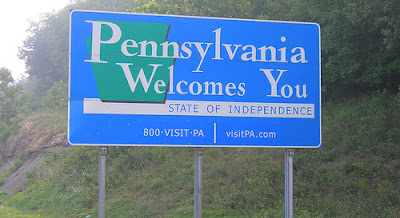 The ACLU has filed a legal challenge to my home state's Marriage Equality ban. Similar suits have also been filed in Virginia and North Carolina.

And it's about time.

Since SCOTUS ruled Article 3 of the DOMA Act Unconstitutional last month, we can expect such suits being filed in the remaining 38 states which currently do not allow for Marriage Equality. And one by one, just like lined-up dominoes, we can anticipate those anti-gay laws to fall on the side of fairness and "Equality Under the Law." I don't expect it to be an easy fight. Pennsylvania's current Repugnican Governor Tom Corbett, like many of his dinosaur cronies, is against Marriage Equality. But in light of SCOTUS' recent decision on DOMA, the state where America was founded is likely to join the current 12 states and DC in legalizing love within the year (though I think my native state of NJ will be first, despite Governor Krispie Kreme's* opposition).

Yes, there are plenty of PA rednecks who live the part of my state I like to refer to as 'Pennsyltucky,' who rant and rave, but the tide has been turning for quite some time and I suspect the progressive thinkers in Philadelphia and Pittsburgh (what's up with that superfluous H?) will prevail.

I can see the whole country eventually turning toward reason as more and more people realize that being gay is not a choice, especially if the LGBTQ community continues to make ourselves known. Yes, the haters will probably always be there, just like the racists and anti-Semitics. But even their numbers are (thankfully) dwindling. Frightened, uneducated jerks like Pat Robertson; Maggie Gallagher; Brian Brown and Bryan Fischer will be silenced soon. And the creeps at the Westboro Baptist Church have long ago become laughingstocks.

While Uncle P has no personal stake (and at my age is unlikely to do so) in the matter, I hope that when I am truly old and decrepit, those who come after will enjoy the rights and privileges afforded every other American citizen.

You've probably seen this Australian Equality promo before, but I think it's worth repeating:

More, anon.
Prospero
Posted by Prospero at 12:06 AM