4.5 Minutes of Intensity and Genius 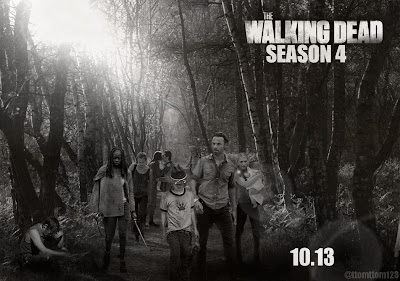 I know, I know. Anyone who cares has probably already seen this. In fact, I'm not even sure where I foumd it - probably via Facebook on the 'I Love The Walking Dead' page. It doesn't matter, really, anymore.

What matters is how amped up Season 4 seems to be, at least from the ComicCon trailer embedded below. To this I say: "HELL YES!!"

If you know me at all, you know I love horror movies and especially zombie movies. And I cannot wait until AMC's "The Walking Dead" regains the top spot on my Top Ten TV Dramas list this year (if I end up doing one... who the heck knows, anymore?). TWD's astonishing 6-episode Season One was truly ground-breaking television and deserved every accolade afforded it. Season Two was... slow, I suppose (hey - even "Lost" had Nicki and Paolo), but built to a very intense second half. Season Three was better than Two, but not up to Season One's quality, which I ascribe to the firing of series creator (and the single best film interpreter of the works of Stephen King), Frank Darabont.

Now under the direction of chief make-up designer Greg Nicotero, the folks at AMC certainly seem to have listened to the fans and considerably  raised the stakes for Season Four. Why do I doubt the trailer's final message? See for yourselves (and watch Full Screen):


Damn! I don't know who is more upset about waiting until October: Uncle P; My Sister; My Mother; My Coworker; My Other Coworker; My College Friend or My College Friend's Daughter. It doesn't matter because even after 3 seasons, I am stupefied by the fact that TWD (along with several other Horror/Fantasy/Sci-Fi shows) is Mom's favorite TV drama. She may not always understand the supernatural/Sci-Fi elements in many of these shows, but she sure appreciates compelling characters and exciting story-telling. The apple doesn't fall far... though it seems I've actually turned her opinion about genre entertainment, even if I have to explain it to her at length.  But that's not a bad thing at all.