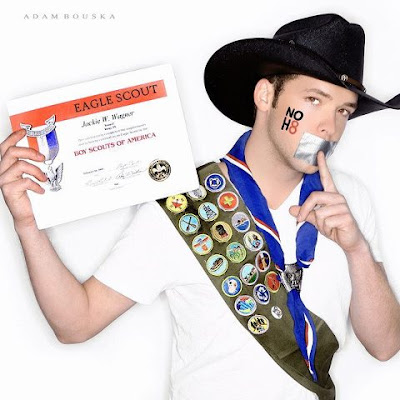 A few of you may be surprised to learn that Uncle P was a Scout. I started out as a Cub Scout in my local troop where my mother (bless her heart) was our Den Mother. I moved onto Webelo (don't even go there) and eventually Boy Scout.

I quit scouting after a disastrous camping trip which involved torrential rain, flooding and some horrific bullying by other scouts in my troop.

It wouldn't be until college that I rediscovered the joys of camping (there were several trips with many dear friends, all of which are stories for another time). My last long-term BF, Ric, was an Eagle Scout (after high school, he hiked the Appalachian Trail alone) and often wore his uniform to gay clubs in protest of the BSA's anti-gay policies, as early as the late 90's (is it too much to say that it was little tight and a lot sexy?). Our last trip together was camping in Provincetown over an intensely hot and humid 4th of July weekend. But that really has little to do with this post.

Here's my dilemma: My Godson* is about to be rewarded the Honor of Eagle Scout on June 1st. I've already told his mother (another dear friend from college) that I am torn about being invited to attended J's Award Ceremony and she completely understands. While I am very proud of J for having made it to a level few scouts achieve, I can't help but feel that attending the ceremony would be hypocritical on my part. Can a gay former scout really approve of an award from an organization which continues to promote exclusion based on sexual orientation?

The BSA recently announced a plan to allow openly gay Scouts, but not openly gay Scout Leaders. Really? So it's okay to be gay until you're 18? I don't get it. And neither do hundreds of thousands of gay scouts who want to participate, but can't once they're old enough to vote and serve in the military. Of course, serving in the military while openly gay is now allowed. If it's good enough for the U.S. Armed Forces, why isn't it good enough for the BSA? Talk about mixed messages.

Yes, the BSA was founded on 'Christian' principles. But that was one hundred and thirteen years ago! While most of the country has moved on, the BSA seems to be firmly rooted in the past. Even most Christians have progressed since 1910. Think there weren't gay scouts before now? Guess again.

Here's the thing: While I will certainly be buying my Godson a gift to celebrate his achievement, I cannot in good conscience attend his award ceremony. And that just makes me sad.

*And yes, I totally see the irony in an atheist having a Godson. It's an honorific. Get over it. I have.

You're supporting him, not the organization. Being there is being visible. His troop (?) pack (?) may be one that will stand for what's right and fight for change. I say go.