After the Superhero Leaves 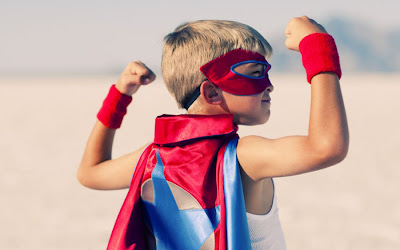 If you've seen Pixar's hilarious Superhero/James Bond mashup movie, The Incredibles, then you know there is always a price to pay for the destruction caused by superheroes in their pursuit of supervillians. Sure, the Super has saved hundreds of thousands of lives from the hands of a madman, but at what cost? I know you've seen the trailers for Man of Steel. I must assume you saw The Avengers and at least the trailer for Ironman 3. Just at look at all the physical property destruction wreaked upon New York and Metropolis and wherever Tony Stark and Mr. & Mrs. Incredible live. Someone has to clean that mess up.

My amazing sister and her husband flew up from Florida to specifically come help me do some things around the house for which I don't have the skills or just couldn't do by myself. Thursday morning they showed up and the BIL went right to work, repairing the gate destroyed by Sandy (I knew there was a reason I didn't throw those pieces away). After he finished that, we went to a famous DIY box-store and spent an hour picking up supplies for the other jobs we had planned on tackling. I drove home at a steady 22 MPH with three 8x6 stockade fence panels tied to my luggage rack and a new ceiling fan for my kitchen; backsplash for my bathroom and assorted hardware for several other projects. Between 2 PM and 6 PM that afternoon, the BIL had installed the backsplash and the ceiling fan; the two of us put up the stockade fence and he repaired another chain-link fence on the short side of the back lawn. We had hoped to trim some of the horrifically overgrown vegetation along the two longer sides of the neighbors' fences, but it was raining off-and-on all day, so that got shelved. Meanwhile, my sister started sorting through some of Mom's extensive jewelery collection, looking for items of actual value. Mom has a lot of 'fashion' jewelry (what used to be called 'costume' jewelry), but she also had a whole lot of fine gold and silver stuff with plenty of real gemstones. Sis, along with being an extraordinary maker of cakes, used to work as a fine jewelry retailer and is a certified Diamondtologist. After a few hours of sorting and cleaning (and Mom's say-so), she had quite a pile of stuff Mom hasn't even seen in years, let alone worn. Exhausted, we met up later at a local diner (along with the BIL's equally gold-hearted sister and her very bright and funny son) for a huge celebratory meal.

Yesterday, while Sis went off to sell the jewelry (which netted Mom far more much-needed cash than either of us anticipated), the BIL came back and started on the trimming we'd been unable to do on Thursday. And he had that look in his eye. The one that said, "I'm bored and I'm going to finish if it kills me." Using only an electric hedge trimmer and my small handsaw, he cleared 2/3 of the long-neglected weeds; vines; small trees and assorted Evil Dead-level vegetation in my backyard before accidentally cutting my 100' extension cord (something of which I've been guilty in the past). He vowed to repair or replace it (and he did). And while I truly appreciate all the hard work he put into it, it's going to take me several weeks to clear all the stuff he cut down. I alreafdy filled two large brown-paper lawn bags and barely touched a quarter of it Trust me, I am NOT complaining! I love that he did as much as he could while here. Hell, I wish we could have done more. And while I still have a ton of work to do in the yard, it hardly seems as overwhelming as it once did. Cleaning up after the superhero is certainly better than fighting the villain alone, no matter how sore one's legs, back and shoulders are... (I should buy stock in the company that makes 'Aleve'). It sucks getting old, kids.


I don't know. Maybe Man of Steel has me all worked up. I just know that I love my siblings and everything they do for me! And I can't wait until I can go down to the F state again for a proper visit!