The Sound of Vincent Spinning 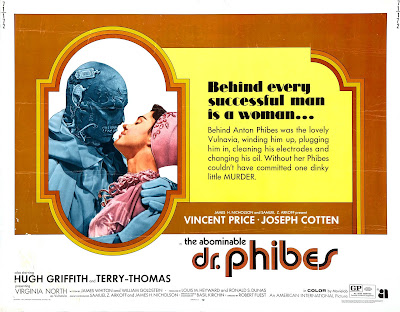 Tim Burton and Johnny Depp have made some terrific movies together. Edward Scissorhands; Ed Wood (Burton's masterpiece, as far I am concerned) and Sleepy Hollow, among them. They've also made increasingly bad movies. Charlie and the Chocolate Factory (which I am almost embarrassed to admit I really liked because of it's loyalty to the book, and Depp's creepy, weird and molestery performance); Sweeney Todd (a movie so removed from its very theatrical origins - much like Les Miserables - that it became little more than a slasher movie with songs); Alice in Wonderland (which I found to be actually insulting to Lewis Carroll and all of nonsense. Imagine being insulting to nonsense. It's actually too sad to be considered nonsense) and worst of all, last year's truly awful Dark Shadows. Burton over-estimated the camp value of the series whose fans hated that he tried to make it into a deliberate comedy. The TV show's appeal was never its camp - it was the characters and the story lines. Sure, they were absurd. But that's the nature of genre TV and film. The audience accepts those unlikely conceits by acquiescing to a willing suspension of disbelief. When the absurdities became the point, that suspension shuts down and people hate you for making fun of the show instead of embracing what they loved about it.

Burton used to be an interesting and actually good filmmaker. But then he got jaded and lazy and lost sight of the importance of story. Anymore, his films are about visual tricks and weird CGI. Depp used to be an interesting and fun actor, but since Pirates of the Caribbean  (not a Burton film), he's become a parody of himself, known for being bizarre more than anything else. His upcoming role as Tonto alongside Armie Hammer's Lone Ranger is just further proof of that. Watch this trailer if you don't believe me.

Of course, Burton and I have many common influences, which naturally makes me want to like his work, very much. One of those influences was the amazing genre actor Vincent Price. And while I've certainly seen just about all of Price's films by now (even the non-genre ones), my favorites are what I consider his Masterpiece Trilogy: The Abominable Dr. Phibes; Dr. Phibes Rises Again and Theatre of Blood. The Phibes movies are about a massively disfigured musician and composer taking revenge on those whom he considers responsible for his wife's death, while Theatre of Blood concerns an insane hack Shakespearean actor who, after failing at killing himself, takes revenge on the critics he blames for his failing career.

Today, Naughty But Nice Rob (a blog I've never heard of before, but was linked to via my Facebook feed), is reporting that Burton has cast Depp in his remake of The Abominable Dr. Phibes. And I responded with "NOOOOOOOOOOOOOOO!!!!!!!!!!"  The bizarre, Steampunk/Clockwork/Art Deco horror movie with murders based on the 10 Plagues deserves a better team. I know Burton has a deep reverence for Vincent (indeed, the film that first got him noticed is an homage to our mutual hero and Price's last film was Edward Scissorhands), but I can't imagine either of them restraining themselves enough to make an actually good version of this movie. They must be stopped. I can't handle the thought of Helena Bonham Carter as Vulnavia.


While Theatre of Blood was adapted into a stage play in London a few years ago, I've always thought it deserved a musical adaptation. Wish I could afford the rights to that. Of course, I could always do an "unauthorized" version...

As for the Burton/Depp remake of Phibes? That spinning sound you hear is coming all the way from Mr. Price's grave.

Check out IN THE FLESH on BBC America - post zombie mini series where zombies are reintegrated, thanks to medication and makeup, into society. Thrus, Fri and Sat at 10pm. Second, longer season okayed for 2014. I have a post going up on monday.

Also, THE PURGE, didn't the original Star Trek do with the Landrew episode?