Review: "The Lords of Salem" 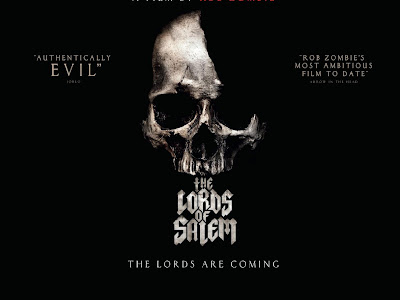 I'm in the minority and actually like musician-turned-director Rob Zombie's 2003 debut film, House of 1000 Corpses. Conversely, I am among the majority in really liking it's brilliant 2005 sequel, The Devil's Rejects. And his fake trailer for Grindhouse (Werewolf Women of the SS*) is hilarious. I was dubious when I heard he was remaking John Carpenter's career-maker, Halloween but was pleasantly surprised that he actually did it some justice. Then came the remake's sequel, which proved disastrous. Still, I had hope for Zombie's latest film, The Lords of Salem. The trailer looked like another trippy, creepy 70's-referencing movie, much like his first two films but influenced this time by Hammer Studios. It won me over with it's weird and wild imagery:


The film's conceit is among the oldest of the genre's old chestnuts: "The Witch's Curse." What a great starting point. Screw history! Let's burn us some real witches in Salem. Naturally, the head witch curses the female descendants of the original colony and makes the descendant of the clergyman who condemned her bear the Devil's child. Trust me, this is not a spoiler and I'll tell you why. Despite hoping for an original and actually scary take on the trope, Zombie takes ideas from dozens of other (and much better) films about witches, the devil and the anti-Christ; throws them all up on the screen and hopes they stick. 1/3 of the way through the film's 101 increasingly absurd minutes, it starts to become apparent that they don't. Another 15 minutes in and the movie stops making any damned sense at all and it becomes an exercise in directorial indulgence for predictable, uninspired shocks; bizarre imagery and as many references to other works as he could fit in.

There are some highly uneven performances from the cast of genre veterans, which includes Dee Wallace; Meg Foster; Bruce Davison; Patricia Quinn; Ken Foree and Maria Conchita Alonso with cameos from Michael Berryman and Sid Haig. An unrecognizable Foster comes off the worst as the curse-spewing witch, Margaret Morgan, out-hamming Al Pacino in Scarface and William Shatner in almost anything. Wallace, Quinn and character actress Judy Geeson seem to be at least having fun as crazy, elderly satanists while Davison and Alonso make an unlikely pairing work. Zombie's wife, (Sheri Moon Zombie) continues to be his muse and leading lady, though at almost 40, Moon Zombie's child-like performance is ridiculous (though only slightly less ridiculous than her awful dreadlocks and her eclectic, pop-art perfect apartment down the hall from Old Scratch). As for those amazing visuals in the trailer? Yes, they're in the movie. But so are dozens more that serve no purpose other than to perplex or disgust or cause some sort of reaction without any rhyme or reason. Note to Rob Zombie: No one wants to look at flabby, old naked ladies (not even flabby, old straight men); your wife still can't act and no matter how much you draw on imagery from Bosch; Fever Ray; Roman Polanski;  Ken Russell and David Cronenberg, The Devil should never look like a frog in a chicken suit as played by Chuy Bravo. My friend Michael and I (as well as the rest of the small crowd at the 8:10 show) laughed out loud at one too many things that were obviously not supposed to be funny, while often asking ourselves aloud: "What the...?"


I suppose it's good to know that Zombie knows his genre's history, but knowing the stories hardly makes him a story-teller. In the end, The Lords of Salem tries too hard to be too many things at the same time, hitting the audience over the head with heavy-handed imagery and totally uninspired references to far better works. While some critics are calling it 'daring' and 'ambitious,' I think The Lords of Salem is self-indulgent twaddle from someone who should know better. Bizarre for the sake of being bizarre is never interesting. Honestly, who actually decided to release this crap? I hope he or she gets fired for it. 0 Stars Out of Four.

Have a marathon at home, instead. Rent Rosemary's Baby; The Sentinel; The Devils; Lair of the White Worm; Naked Lunch; Altered States and The Fly and have an actual good time watching movies with the same themes and visuals, made by actually talented directors. What the hell happened to the guy who made *this?: