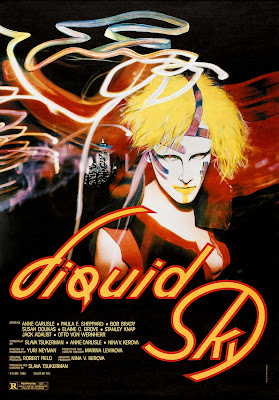 While visiting my usual haunts, I came across a video teaser (via) for a group (or song - not sure which) called Sparkles and Wine. I have no idea exactly why, but watching it sent me right me right back to the weirdness that was the 1980's and Russian director Slava Tsukerman's 1982 film Liquid Sky. Performance artist and model Margaret (Anne Carlisle) is addicted to heroin and sex. She has so much sex that aliens, who live on the endorphins produced by heroin and orgasms, land on the roof of the building across from her apartment in order to consume her many partners' (including male model Jimmy - also played by Carlisle) endorphins. Much mayhem ensues.

I saw this movie with my friend Deb (the mother of my godson) at the Ritz* in Philadelphia. We were both very into the music, fashion and "F*ck You" attitudes of the anti-mainstream, just like every other 20-something of the time. Loaded with time-lapse images, outre dialog and loads of folks on the fringe, Liquid Sky was (and is) very much a product of it's time.

Carlisle and Tsukerman went on to a few more projects, though neither has been heard from in the U.S. since the 90's and few (if any) of the rest of the cast has gone on to do anything significant. It may not exactly be brilliant, but Liquid Sky is certainly indicative of the anti-establishment movements of the 50's, 60's and 70's, simply replacing Beatniks and Hippies with Punks and New Wavers.

*Also where I saw Hedwig and the Angry Inch for the first time.
Posted by Prospero at 11:52 PM