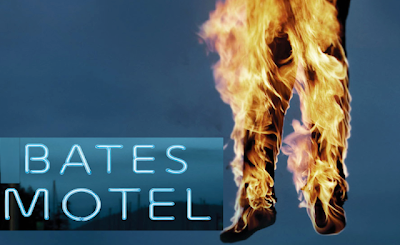 Now that AMC has the highest-rated show on television with their often frustrating though usually amazing adaptation of Robert Kirkman's "The Walking Dead," it seems that every network is jumping on the horror bandwagon (more on NBC's "Hannibal," soon). Cable rival A&E (which used to stand for 'Arts & Entertainment') has given us their reboot of the Psycho franchise with "Bates Motel."

Set in modern California, "Bates Motel" is all about the young Norman Bates, his relationship with his mother and all the things that would eventually lead him to become the serial killer we all know and love. Novelist Robert Bloch based Norman on the infamous Wisconsin murderer Ed Gein, who also served as inspiration for the The Texas Chainsaw Massacre.  Gein dug up the graves of middle aged women he thought resembled his mother and made 'trophies' of their various body parts. In Bloch's novel Psycho (and Alfred Hitchcock's astounding subsequent film), Norman Bates kills and taxidermies his mother, takes on her persona and kills women "Mother" thinks jeopardizes their relationship.

"Bates Motel" begins with the 'accidental' death of Norman's father in the family's Arizona garage. Norman (Freddie Highmore) is devastated, though his mother Norma (Vera Farmiga) is surprisingly calm. Flash forward six months and the Bateses have moved to California where Norma has purchased a house and motel in order to start a new life for her and her son. Soon, the property's former owner, angry at having lost the motel in foreclosure, shows up to harass and eventually rape Norma. After Norman bashes the rapist over the head, Norma stabs him to death and convinces Norman to help her cover up the crime by dumping his body in a nearby lake. It isn't long before the hot Sheriff (Nestor Carbonell) and his younger, but equally attractive, deputy (Mike Vogel) show up with questions about the former owner's disappearance. It doesn't help matters that Norman, while ripping up a blood-stained carpet in one of the motel's rooms, discovers a hand-drawn diary of sorts, detailing the murder of an Asian sex-slave at the motel. Oh, and there are several attractive young girls at Norman's new school, who find the nerdy geek attractive, one of whom is the CF-suffering daughter of a taxidermist (hit us over the heads, much?). Of course, we all know nerds rule the world, but since when did 17 year old girls find them so hot?

Series creator Anthony Cipriano has set up an intriguing premise, though I can't say that all of what he's attempting to do works. There are some fine and interesting performances from Farmiga (Up in the Air) and Highmore (Charlie and the Chocolate Factory) as the dysfunctional mother and son. Carbonell (listed in the credits as a 'Guest Star,' so we already know he doesn't have long to live) applies the same intensity as he did to the FBI agent he played in the ill-fated "Ringer," but comes off as a bit of a jerk, much like his age-defying character on "Lost." Vogel (coincidentally having appeared in the 2003 remake of The Texas Chainsaw Massacre) is certainly pretty, but not much more. In fact, it seems like the producers (among them "Lost" producer, Carlton Cruse) of the show have gone out of their way to cast it with only very attractive actors, many of whom could be replaced with similarly attractive actors without anyone in the audience taking notice. It's almost as if they want to distract us from the very silly plot (which involves a town-wide marijuana farm conspiracy and a sex-slave story) with eye-candy. Not that I'm against eye-candy, per-se. I just prefer some substance to go along with it. The relationship between Norma and Norman tries to provide that substance, though the addition of Norman's half-brother Dylan (the also very pretty Max Thieriot), does little to help the cause.

While "Bates Motel" is certainly interesting, I don't think it has the legs to carry beyond a season or two. Especially since we all know the outcome. ** (2 Stars out of 4).