Yoko Is Out of Her Mind (Plus Bonus Hilarity)

Well, we've always known Yoko was a little mad. Now she's proving it with a men's fashion line for Opening Ceremony (via). Featuring decidedly unmasculine colors, patterns and fabrics; tube tops; exposed shoulders and open-toed, thigh-high boots with pockets, I can't imagine any man (gay or straight) not being laughed out of a room when wearing any of these clothes. Hell, I can't even imagine any drag queen I know wearing this over-priced, nonsensical crap.

Yes, I get it. Haute Couture is never really meant to be worn anywhere but on a runway. Thierry Mugler, Jean-Claude Gautier and other designers create these things primarily to show how clever they are. But their pret a portier (ready-to-wear) lines are never quite as outrageous and usually more acceptably mainstream. But Opening Ceremony is actually offering Yoko's designs for sale. I can't wait to see what Joan Rivers and company have to say about these togs on her snarky (and occasionally hilarious) show "Fashion Police." If you have a couple of thousand dollars you don't know what to do with and no dignity, you can own a Yoko Ono original. But I'd bet you wouldn't be willing to admit that you do. 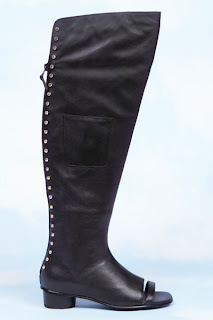 Just look at that boot. I don't think that even the Marquis de Sade would wear those boots, unless he wanted to inspire pain from looking at his gnarly, yellow toenails. And just what would one keep in the pocket? A pack of smokes? A couple of tabs of X? Oh, maybe the remaining shreds of one's dignity.

This line has led to me three distinct conclusions about Ms. Ono:

1. She's seen Cirque du Soliel's The Beatles: Love one too many times.

3. She's always been insane and is now going out of her way to prove it.

You can draw whatever conclusions, you like. I'm sticking with these.

On a completely different and totally unrelated note, I stumbled upon this little gem earlier today (though I completely forget where) and had to share. Zombies are everywhere these days, and this banned commercial from XXL Sports takes full advantage of their popularity:

Nonsense, fashion, insanity and zombies. What more can one ask from a single post?

I don't think Yoko is out of her mind. I kind of like her fashion sense. I mean...it's not something I could wear because I don't have the body for it, but I know some guys that could totally look fetching in that stuff. I think it's basically for the extravagant person.