We're Not in Omaha Anymore, James 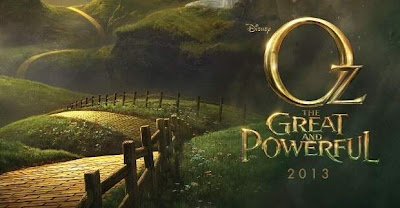 A few months ago, Disney released a rather impressive trailer for director Sam Raimi's Oz: The Great and Powerful, a prequel to the most beloved fantasy film of all time, The Wizard of Oz. Unlike Gregory Maguire's political satire Wicked, which explores the relationship between the the witches of Oz before the arrival of Dorothy, Raimi's film delves into the arrival of the Wizard into the land of Oz.

The sexually ambiguous James Franco is Kansas magician Oscar Diggs who finds himself transported to Oz where he meets  the witches Theodora (Mila Kunis); Evanora (Rachel Weisz) and Glinda (Michelle Williams) who draw him into a power play for control of Oz. Today, Disney released the full trailer, and it looks nothing less than magnificent.

Raimi (despite Spider-Man 3) remains one of my all-time favorite modern directors. He has a very distinctive visual style and a rather twisted sense of humor (which is quite apparent in his brilliant horror movies Evil Dead II and  Drag Me to Hell). Personally, I can't wait for his take on L. Frank Baum's iconic characters.


Of course, I'm one of the few people who loved Disney's 1985 film Return to Oz, a rather dark sequel to the original, which stuck much closer to Baum's novels than the 1939 classic and introduced audiences to a young Fairuza Balk, who would later go on to become a Goth film icon.


Disney is banking on Raimi to create an Oz franchise with this new film, though I'm guessing that the film version of the Steampunk-inspired musical based on Maguire's novel will be the movie to move the story forward given Maguire's two sequels to his original novel.