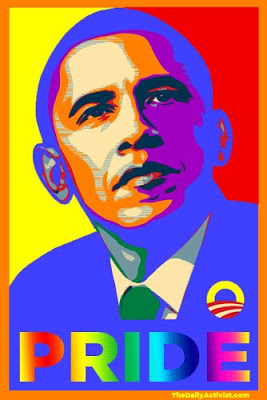 I missed last week's "Walking Dead" recap due to Sandy and while I thought this week's episode was exceptionally exciting, emotional and powerful, I'm skipping the recap to talk about something near and dear to my heart. Something with which I know most of you already agree, but it's my last chance to rant about it, so I'm going to.

Tomorrow is the Presidential Election in the U.S. Personally, I don't understand how any LGBT person; any woman; any elderly person; any disabled person or otherwise disenfranchised person would vote for 'Rmoney.' He doesn't care about you. He claims he's going to create 12 million new jobs? Out of thin air? Maybe he intends to reinstate the WPA (something I think would actually be good for the country and our decaying infrastructure), but he has yet to show anyone how he plans to do that. He claims he's going to reduce taxes for the middle class, but his infamous "47%" video proves otherwise. He claims he wants to move the country forward, but his stand on social issues would actually move the country back by 50 years or more. His religious views certainly inform his views on government and anyone who allows religion into the governance of a decidedly secular country simply cannot govern fairly.

If you are a U.S. reader of this blog, I know you already feel the same as I do about Mitt Romney and his decidedly anti-LGBT; anti-women; anti-progressive stances. The man can simply NOT be allowed to run this country. It would be devastating to everything we have fought for in the last 30 years or more. He wants to overturn Roe V. Wade. He wants to abolish Planned Parenthood. He wants to redefine 'rape.' He wants to reinstate DADT; enforce DOMA and abolish ENDA. Basically, he wants to force his personal religious beliefs on the entire country. 'Disgusting' doesn't even cover it. And let's not even go into his flip-flopping and lies.

President Obama, on the other hand, has delivered on more campaign promises than any other President  in recent memory. He repealed DADT; ended the war in Iraq; authorized the mission to get Bin Laden; saved the auto industry; started the end of the recession and publicly endorsed Marriage Equality. How much more do you want in four years? Let's give him four more and see what happens.

I know I'm preaching to the choir, here. I know that 99.9% of you agree with everything I'm saying. But none of that matters if you don't vote. Vote. Because our lives depend on it. Vote. Because you know what's right. Vote. Because a country under the leadership of a millionaire who believes God lives on a planet called Kolob, is a country governed by a very dangerous lunatic. Let's keep loonies out of politics, shall we?