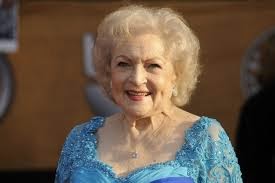 From an offhand comment by a Facebook friend (Hi, Michelle!), came my latest 'thing.' Now hear me out on this one.

The incomparable Jessica Lange has already announced her departure from "American Horror Story," the anthology/repertory genre series that won her two Emmy Awards, after this season.

America's Favorite Dirty Old Lady/Sweetheart has just learned that TVLand has cancelled her often quite hilarious sitcom "Hot In Cleveland." Yes, Lange has been the show's 'star,' but other company members (Sarah Paulson; Frances Conroy; Evan Peters; Lily Rabe) have been the backbones of many episodes and seasons. Who better to be the next Grand Dame of whatever nastiness Ryan Murphy and company have cooking for Season Five. It certainly wouldn't be her first foray into genre work. Remember her hilarious turn as a foul-mouthed farm widow in Lake Placid?

She'd fit right in with newer company members Kathy Bates and Angela Bassett. I can see them as some sort malevolent troika of evil... deliciously camp and sickly twisted!

And don't forget, a similar campaign got her a particularly hilarious gig hosting "Saturday Night Live:"

She's even hosted her own (rather lame) hidden camera show, "Off Their Rockers." Think 'Punk'd" meets Cocoon.


Surely Ryan Murphy knows the value of good publicity and ratings. So I am asking you to take to Twitter and Facebook and make the hashtag #BettyWhiteOnAHS trend hard! Let's get Betty another outrageous gig!