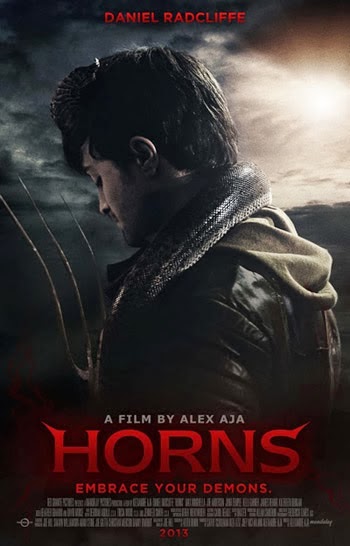 One of the many benefits of traveling for my day job is the opportunity to catch up on films I missed in theaters at no additional expense to me. This past weekend's jaunt to San Francisco was no exception and I was able to see two newish movies while flying and a current release in my hotel room.

First up, Alexandre Aja's take on Joe Hill's second novel, Horns. I read 'Horns' over a few nights while staying at my sister's a few years ago, and while I liked it a lot, I thought his first novel, 'Heart-Shaped Box' was better. (Hill, if you don't know, is the son of prolific genre novelist Stephen King, writing under his mother's maiden name). Ig Parrtish (Daniel Radcliffe) is accused of murdering his long-time love Merrin (Juno Temple). When he suddenly sprouts what appear to be demonic horns on his forehead, Ig finds those he encounters incapable of telling him anything but the worst secrets about themselves. Determined to find Merrin's true killer, Ig tears through his Pacific Northwest hometown, exposing the worst among it's residents, including his own family. Aja (High Tension; The Hills Have Eyes) displays his distinctive look in full, giving Horns a very in-your-face style. Radcliffe is impressive in the role, though some may find Harry Potter swearing and having sex a little off-putting. Supporting performances from James Remar; Kathleen Quinlan; Heather Grahame and David Morse are excellent, across the board, though Temple seemed a little flat in a role which consisted entirely of flashbacks. While some critics truly disliked Horns, I thought it a fairly faithful adaptation with some interesting FX and an hilarious comment on the secrets we all try to keep from one another. *** (Three Out of Four Stars). Horns is rated 'R' for "sexual content, some graphic nudity, disturbing violence including a sexual assault, language and drug use."


Next was director Bryan Singer's newest entry in the franchise he created, X-Men: Days of Future Past. While I've always had issues with time-travel story lines, Singer manages to almost seamlessly combine the casts of both timelines in the series in a story revolving around a group of genetically-altered robots used to root out and destroy mutants. With a plot too convoluted to go into in a mini-review and Hugh Jackman's obviously aging Wolverine as a character who doesn't age, Days of Future Past somehow works, despite minimal appearances from the franchise's most famous members. "American Horror Story" cutie Evan Peters and "Game of  Thrones" alum Peter Dinklage join the growing number of terrific actors to appear in the franchise. Great FX and some complex performances from James McAvoy; Michael Fassbender and Jennifer Lawrence help make Days... one of the better entries in the franchise. *** 1/2 (Three and a Half Stars Out of Four). Rated 'PG-13' for "sequences of intense sci-fi violence and action, some suggestive material, nudity and language."


Finally, comes prolific director Woody Allen's latest period piece, Magic in the Moonlight. Set mostly in the south of France in 1928, Magic... is the story of a magician and psychic debunker (Colin Firth) who is pressed by a friend and fellow magician (Simon McBurney) to reveal the fakery of an American medium (Emma Stone). What follows is a rather dull and predictable story in which Firth's character is fooled by and eventually falls in love with Stone's. Allen's oft-studied themes of religion and atheism are at the core, but it's nothing we haven't seen from him before. Supporting performances from Hamish Linklater; Marcia Gay Harden and Jackie Weaver and some lovely period costumes and set-pieces make the movie a bit more palatable, but I haven't seen an Allen film I've loved in a long time. There is really nothing new or interesting about Magic in the Moonlight and I think it may finally signal the call for the once-hilariously brilliant filmmaker to retire.  ** (Two Out of Four Stars) Magic in the Moonlight is rated PG-13 for " a brief suggestive comment, and smoking throughout."