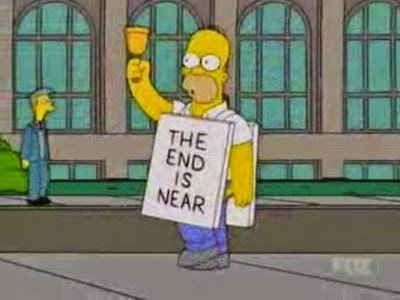 Is it time to pack it in, kids? It's been almost an entire month since I've posted anything. I've gotten so poor, I don't go to the movies even half as much as I used to. The last show I did seems like forever ago, already and I'm battling an early-onset bout of S.A.D. Vegas, while interesting and another city off my Bucket List, wasn't nearly as exciting as I'd hoped (being poor is no fun in Sin City). And Thanksgiving dinner alone in an Italian restaurant -- even if it is one of the best Italian restaurants in town -- is hardly a Holiday meal. Don't get me wrong, I enjoyed my trip but I have no need to go back any time soon and I certainly wouldn't go alone, again. Still, it was better than my last Thanksgiving (shh... don't tell Auntie).

Uncle P's life has changed so drastically over the last 14 months... And while the promise of a fulfilling creative venture looms, nothing is set is stone. Everyday seems like a struggle... Oh, don't get me wrong. I'm not going anywhere. There's depressed and then there's depressed. I've been depressed and have no intention of going back there. This is most definitely NOT a suicide post.

It is, however, about the possibility of ending Caliban's Revenge. That doesn't mean I'll stop using social media. Hardly. I seem to reach way more people on Facebook and Twitter (even though I hardly use Twitter) than I do here. And who's to say I wouldn't start a new blog about something different. Food, maybe. Cooking is one of my other great passions. "Prospero Cooks" That could work.

PS - The trailer for Mad Max: Fury Road is one of the many things that makes me want to live:

Sorry too hear you're feeling down. I'll certainly miss your blog if it goes, you pretty much always post something that interests me.

Thanks, Tony. I am still deciding, but hope to hang in. Stay tuned!