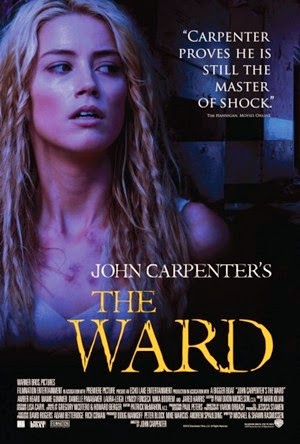 Genre great John Carpenter made his mark with the original Halloween and has since made some of the most memorable genre films of all time, including Christine; They Live; his amazing remake of The Thing and the very campy Big Trouble in Little China, among others. This 2010 effort from the now 68 year old director, unfortunately can't hold a candle his previous work.

Amber Heard plays Kristin, a teen girl found standing outside a farmhouse to which she set fire, and with no memory of anything before that. She is taken to a special ward of the local mental hospital where Dr. Stringer ("Fringe" and "Sherlock Holmes" villain Jared Harris) is testing a new kind of therapy on a group of similarly-aged teen girls, each with their own disassociative disorders.  Kristin moves into the room formerly occupied by Tammy, who in a prologue appears to have been murdered by some malevolent entity.

What follows is probably the most un-Carpenter-like Carpenter film ever made. Filled with cliches and genre tropes, this 1966-set 'ghost' movie ends up being little more than a pseudo-psychological thriller ala Identity and Shutter Island, though both of those movies are superior in almost every way. There are some terrific performances by the young cast, which includes Mamie Gummer; Danielle Panabaker; Laura-Leigh and Lyndsey Fonseca, all of whom have appeared on plenty of prime-time dramas and assorted smaller films, and all of whom manage to create interesting - if not exactly original - characters. The script by Michael & Shawn Rasmussen is both clunky and derivative, and I am surprised Carpenter agreed to do it. Proof that even if you've got it, you don't get to keep it.

Want to have a John Carpenter Halloween movie festival? Watch the 5 films mentioned in the first paragraph of this review and avoid this stinker like Vampires. *(One Out of Four Stars). The Ward  is rated 'R' for "violence and disturbing images." It is currently playing on Cinemax and Cinemax OnDemand, should you wish to waste 89 minutes.