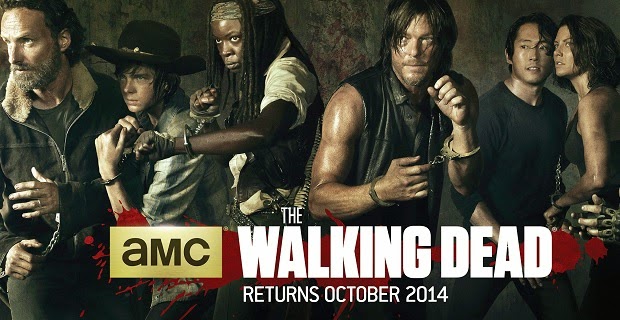 I am hardly surprised by the general excitement surrounding this coming Sunday night's Season 5 premiere episode of AMC's massive genre hit, "The Walking Dead." Nor am I in the least surprised by my personal excitement. The consistently excellent writing (yes, even Season 2), acting and production values on the cable original all combine for a show that (love it or hate it) will certainly go down in the annals of Television History (as long as such things exist, anyway) for so many reasons.

If you were with me back then, I would re-cap and comment on each episode during Season One and some of Two. I sort of miss doing that, but don't have the time to do so, anymore. But I still love the show and realize that Season Five is a milestone and I want to commemorate that for a couple of reasons.*

Sunday, October 12th from 9:30 PM Eastern to 11:05 PM Eastern, Uncle P will be Live Tweeting leading up to the premiere and during commercials! It will be the only episode I'll watch in real time this season (or maybe the season finale if this goes well - we'll see...). I hope I have enough to talk about!

*All of this, I think, is part of a new enthusiasm inspired by several recent events in Uncle P's life that are pretty much the exact opposite of the events around the same time last year (more on that in my next post). My 'New Normal' continues to become a more level and increasingly positive place that makes me want to get back to writing and expressing myself more. When I thought of doing the Live Tweet thing, I got excited about writing again and I can't wait to see what happens! Hope to see you on Twitter on Sunday night. I'll try not to be too spoilery!

I'm so happy for you and the tweeting sounds like fun. You're starting at 9:30 even though the show begins at 9? Mistake, or do you like to watch with a bit of a time delay so that you can FF through the commercials?

I gave my nephew the graphic novels for his birthday in April and he LOVED reading them all summer.