The Value of Solidarity 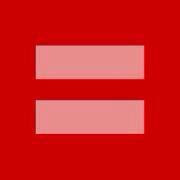 So, if you are on Facebook or Twitter, you have no doubt seen the symbol that's on your right. You may even have seen it if you don't use social media, as it has made a bit of a stir on traditional media outlets, as well.

It is a variation of the Human Rights Campaign's traditional blue and yellow Equality logo. As the US Supreme Court heard arguments in both the Prop 8 and DOMA cases yesterday and today, millions of social media users (Uncle P, included) changed their profile pictures to HRC's pink and red logo. Interestingly, it wasn't just LGBT people who did this. On Facebook, my news feed was a sea of red as a good two thirds of my Facebook Friends posted the symbol, the majority of whom are straight. Seeing so many friends lend their support to Marriage Equality was both heartwarming and empowering. Of course, I wouldn't actually be Facebook Friends with anyone who wasn't LGBT friendly. And like many Facebook users, the majority of my Facebook Friends are people I've never actually met in person. They are friends of friends, or people with similar interests and beliefs, or just folks I think are funny and cool.

George "Sulu" Takei is being credited for getting the bandwagon going on this. His many, many followers saw him post it (and it's many, many variations) and took up the mantle, showing their support for him and LGBT people in general. It was amazing. Of course, there were detractors. "Oh, like SCOTUS is going to base their decision on your Facebook profile picture." Of course, that's hardly the point.

Here's the thing: The overwhelming majority of social media users (most of whom are between 18 and 30), are for Marriage Equality in America and don't understand why anyone would do otherwise.  The millions of folks who posted the red Equality symbol don't need to show SCOTUS that they support the cause (though traditional media coverage certainly couldn't escape the 9 Justices). Still, those straight allies who posted the symbol did so much more, just by letting us know that they have our backs. The tide is changing, and the pervasiveness of the red Equality symbol says more than any Quinnipiac poll ever could.

The haters are losing. And that's OK with me. And my friends, both on Facebook and in real life.