Damned If You Don't 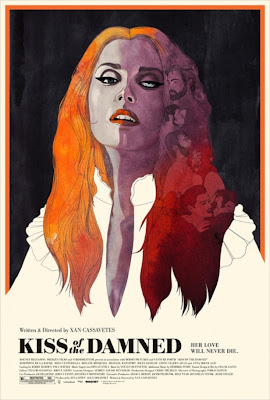 Alexandra "Xan" Cassavetes (daughter of actor/director John Cassavetes and actress Gena Rowlands) has directed a 21st Century take on the old Hammer vampire movies of the late 1960's and early-to-mid 1970's with her fictional feature debut Kiss of the Damned. Sexy, gory and loaded with old-school Hammer imagery, the trailer for Kiss... very much reminds me of the old Christopher Lee Dracula films churned out by Hammer studios when I was a kid.

Cassavetes seems to have pulled out all the stops on this over-the-top SXSW fan-fav, using everything she learned from her father's films combined with the Hammer pantheon to create a vampire movie 1000 times sexier (and probably 10,000 times better) than anything starring that Uber-Creepy Flat-Faced Brit and the Girl Who Can't Act to Save Her Life.

Released by Magnet (the same studio who gave us the sentient tire movie, Rubber), Kiss of the Damned will be available OnDemand March 28th and in limited theatrical release on May 3rd. You can visit the film's Facebook page here. I'm hoping it will play locally and will post my review as soon as I have seen it. The Red Band trailer below may be NSFW, depending on where you work.