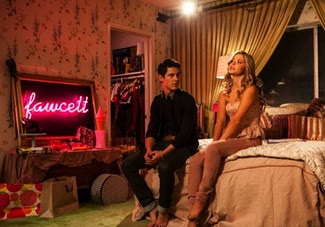 Don't expect much. I have no idea if I'm actually back or not. But I saw this crowd-funding video for the new film from director Darren Stein's (Jawbreaker) new feature, G.B.F., about three Mean Heathers vying for the affection of their high school's only openly gay boy in order to claim him her Gay Best Friend. As I am about to revive two dormant artistic projects with two different collaborators, one of which will involve a Kickstarter (or some other crowd-funding site), I was intrigued and took a look. And I have to be honest; as much as I want to endorse and encourage LGBT and LGBT-themed Film and Theatre, I'm not sure G.B.F. is any smarter or funnier than any other lame teen sex comedy. Watch the video and then I'll explain (via).


Really? The so-called Gay Best Friend is an 'accessory?' What the hell? Oh, okay. The lesson is actually that 'no people should be treated as accessories.' That's good. But for a movie that's supposed to be told from the perspective of two gay teens, there seems to be an awful lot of focus on the straight girls. And while happy to promote LGBT friendly stars Natasha Lyonne and Megan Mullally, they curiously neglect to include co-stars Rebecca Gayheart; Jonathan Silverman and the newly-slim Horatio Sanz in the promo. I'd be advertising to the broadest audience possible, wouldn't you?

I get it. I do. It's a gay Rom-Com for young audiences. No one is expecting high art or any statement  (unless there's one they aren't showing us in the teaser). Don't get me wrong, there's a lot to like about G.B.F. I just wish there was less to dislike. Or maybe it's just me. Have I moved past these kinds of movies? No. I still love Big Eden; All Over the Guy and The Lonelyhearts Club (all for mostly sentimental reasons).

I'll have to actually see G.B.F. before giving a fully informed opinion, though I don't think I'm too far off the mark, here. What do you think? Will you see G.G.F. should it be released? Would you be willing to invest in it? I miss your comments.