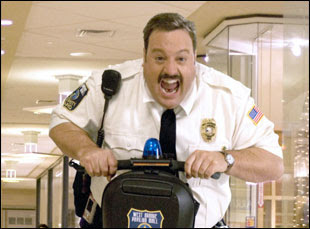 I don't understand how some movies get made. Take, for example, Paul Blart: Mall Cop . Absolutely nothing about this movie looks even mildly amusing, let alone funny. Nothing against Kevin James. His stand-up was pretty funny, back in the day and "The King of Queens" had its moments. I didn't see the movie he made with Will Smith, but it was so unmemorable that I can't even come up the title without checking IMDb.
Paul Blart looks to me to be about as funny as a rubber crutch. Of course, I suppose it has the same sort of appeal as a traffic accident - you're horrified, but can't look away. The trailer is nothing but a bunch of noisy fat jokes at James' expense. Of course, if he wants to make money exploiting the fact that he's fat, more power to him. And yes, humor is probably the most subjective thing in the world. What makes me roll my eyes and snort derisively may have you rolling on the ground, clutching your gut and screaming with laughter. Somehow, I doubt that Paul Blart will have the latter effect on anyone.
So, can anyone explain how a movie like this gets made? Who is the executive who read this script and said "Yes. We can make millions on this idiocy!" And did that person green light the film because he (or she) knows that most of the people who go to movies (boys, aged 14 to 21) wouldn't know a good one if it bit them in their proverbial behinds? Or is it because they had a few million dollars to throw away as a tax write-off? Or maybe James has some dirt on a producer somewhere (or vice-versa) and it's the result of an elaborate extortion plot. Certainly, no one involved in the making of Paul Blart actually thinks they have a good movie on their hands (and if they do, I suggest they seek therapy to rid them of their delusions). But what can we expect? It is January, after all.
More, anon.
Prospero
Posted by Prospero at 12:35 PM