Too Much to Discuss 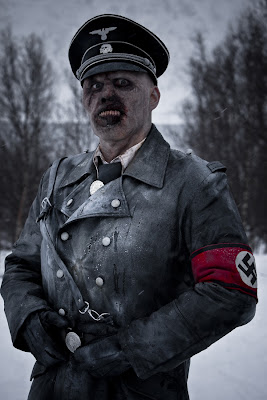 So, what should I talk about first? Maybe the Oscar nominations? Yawn. The Reader was the only real surprise, here, though I suspect the film was nominated more to honor the late Anthony Minghela, more than anything else. Seriously, did anyone out there really think the Academy voters were going to nominate The Dark Knight? Don't get me wrong, it's a great movie. It's just not the kind of movie Oscar loves. Perhaps as films in the superhero genre get better and better, we'll see more and more noms in the important categories, though it's probably unlikely. As we get closer to the big night, I'll give you my picks.
Well then, how about some other movie news? I already talked briefly about Dead Snow, the Norwegian Nazi Zombie flick. The big news is that it sold at Sundance, which means we may actually get to see it here in the states sometime in 2010. Collider.com has some great clips and two trailers here. As I am sure you can surmise, the image above is from the movie.
********
I discovered a great site the other day and these next bits of weirdness are from them. Weird Universe has all kinds of fun stories about all kinds of weird and wonderful things from all over.

********
First, here's a clip of probably the weirdest music video you'll see this week (and yes, this is a John Lennon song):

********
The fun in the following clip really starts at about 1:03, though the VJ introducing the clip is pretty awesomely weird, himself. My question; Is that your Dad singing? Dude, he needs to realize he's old, unsexy and totally lame.
********
Finally, here's the Hillbilliest (yes, I just made up a word) story you'll read today. In Kentucky, a guy named Cletus Mullins apparently killed another guy named Catfish Jones. I wish I could make this stuff up. Read it here:
http://madisoncourier.com/main.asp?SectionID=178&SubSectionID=270&ArticleID=48687
As always, more, anon.
Prospero
Posted by Prospero at 10:37 PM