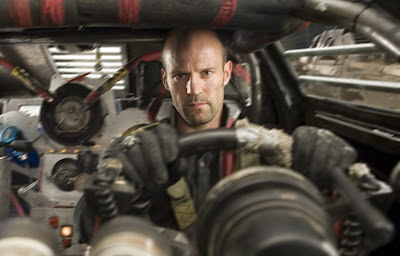 As far as this reviewer is concerned, any time Jason Statham gets naked is a cause for celebration. In Death Race, director Paul W.S. Anderson's update of Roger Corman's classic Death Race 2000, Statham plays Jensen Ames, a former race car driver of the future, framed for the murder of his wife and sent to prison where he is offered a chance for freedom if he will replace the popular, though recently deceased "Frankenstein" in the prison's televised "Death Race." Joan Allen (what the hell is she doing this movie?) plays the ruthless Warden Hennessey and Ian McShane (HBO's "Deadwood") is Frankenstein's top mechanic, Coach. Sadly, Statham isn't naked nearly enough for my taste... sigh...
Best known for schlocky tripe like Resident Evil and Aliens vs. Predator, Anderson can never be accused of making 'art.' His movies are loud and vulgar, and none so much as this one. The action is over-the-top, the plot completely ridiculous (and almost totally ripped off from the equally silly The Running Man) and the acting is secondary to the crashes, explosions and bloodshed. As with most movies in which Statham appears, it's best to put your brain in neutral and just go along for the ride. And while that ride may be fun while it lasts, it will leave little, if any, impression once it's over. * (One Star).
Posted by Prospero at 10:54 PM