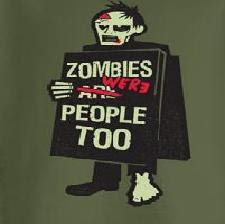 Here is a link to a story that made me laugh, a whole lot:

It also made me ask myself, why are zombies so damned popular? George Romero's 1968 film Night of the Living Dead basically started an entire sub-genre of horror films. Since then, there have been countless imitators and extrapolators. There are zombie clubs, zombie crawls, zombie flash mobs and even zombie weddings. Danny Boyle invented the "fast-zombie" in 28 Days Later and Zack Snyder followed suit in his 2005 update of Dawn of the Dead. Mel Brooks' son, Max, wrote the hilarious "The Zombie Survival Guide" and the overrated "World War Z" (currently in pre-production) and even Romero is at work on his sixth film in the series, currently titled ...of the Dead.

So what is so fascinating about the Living Dead? For me, it's the humor (both intentional and non) that permeates the genre. Dark and grim? Certainly. Hilarious? Without a doubt. Zombie movies allow us to view ourselves in a different light; stripping away the civility and moral decency we afford ourselves and reducing human beings into little more than mindless consumers, bringing about our own destruction through the depletion of our resources. When everyone is dead and there is no living flesh left on which to feed, won't the zombies eventually starve and rot away, giving rise to the Giant Cockroach Society which will eventually rule the planet? But I digress.
I think that it's a case of "We have seen the enemy and they are us." The modern flesh-eating zombie is our worst nightmare - a mindless eating machine intent on one thing and one thing only: eating you. Our souls in question; our violence increased and our hunger insatiable, the zombie represents all that is Id and none that is Super-Ego. In other words, us without self-control, the only thing that truly separates us from the lower species.
Or, maybe we just love seeing some blow-hard know-it-all get torn in half, screaming "Choke on 'em!" as he watches his legs get dragged away. 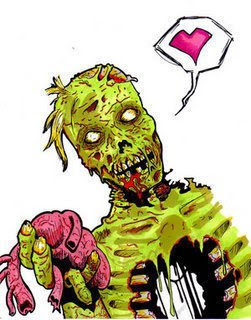 So, thank you, George Romero, for inspiring a genre and many a nightmare.

Prospero.
Posted by Prospero at 12:28 AM