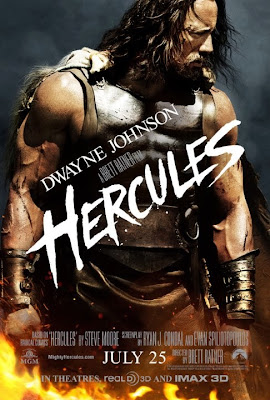 "Joey, do you like movies about gladiators?" ~ Captain Oveur (Peter Graves) in Airplane!

I really have to hand it to Dwayne Johnson. The Samoan superstar who started out as a professional "wrestler" has become a household name (though I promise more people refer to him as "The Rock" than Dwayne) through a very successful and eclectic film career. He has done well in both action and family films and has a stellar reputation as a genuinely nice person and a very professional performer. And while he may be very unlikely to win an Oscar, genre awards are certainly within his reach. Last summer, Johnson hit theatres in terrible action director Brett Ratmner's Hercules (the second of 2 Hercules movies last year; the other starred the Aryanesque Kellen Lutz and was directed by rival terrible action director Renny Harlin). Based on a graphic novel by Steve Moore, this version is a rationalist's delight with a dash of 'magic' which results in a very mixed bag of a movie and happily surprising, not at all what J and I were expecting when we sat down to watch it Friday night.

Johnson's Hercules is a the leader of a band of mercenaries, all devoted to him and to promoting the legend of his own creation. When hired by the beautiful Ergenia (Rebecca Ferghuson), daughter of Lord Cotys (John Hurt) to unite Thrace and free the land from a monstrous army of 'demons' and 'centaurs' led by the vicious Rhesus (Tobias Santelmann), the group sets out for a promised payout of twice Hercules' weight in gold, enough for all of them to retire and live out their lives in peace. Among team Herc are mystic warrior Amphiaraus (Ian McShane); Autolycus, King of Thieves (Rufus Sewell); Amazon warrior Atalanta (Ingrid Bolso Berdal); nephew and story-teller/barker Iolaus (cutie-pie Reece Ritchie) and silent berserker Tydeus (Aksel Hennie). Also on hand is Joseph Fienes in the small but pivotal role of King Eurystheus, for whom Hercules slew the 'Hydra.'

Almost everything (except McShane's drug-induced predictions) is refreshingly given a very rational and sensible explanation (I'm not sure if I liked the 'Hydra,' the 'demons' or the 'centaurs' more). The fairly good CGI is equally used to create gigantic sets and armies as well as a few hallucinogenic creatures. There are several violent and bloody battles which (I reluctantly must admit) Ratner's team actually handles quite well, with none of the blurring and confusion generated  in so many similar battle/fight sequences. The massive Johnson* (who looks about as Greek as I do) holds his own in uncomplicated role, while McShane and Sewell are more than up to the task of pulling off some of the sillier bits. Unfortunately not even Fiennes' appearance (last seen in "American Horror Story: Asylum") can make up for some of truly ridiculous things in that keep this movie from being worthy of a higher rating. For example...

J and I continue to grow closer and literally had the following same comments/complaints at the same time:

"If this is Ancient Greece, why does everybody except Hercules have a British accent?" (somewhat excusable, I suppose, given the mostly British cast)**

"How does everyone know who he is without every having seen him before?"**

"Saw THAT coming fifteen minutes into the movie."**

Action/Fantasy fans should have a good time with their brains in 'park.' There are all sorts of different eye-candies to go around for everyone but if you're expecting the kind of cheesy beefcake provided by Steve Reeves in the 50's and 60's, this isn't what you're looking for.  Let me put it this way:  Looking for a new take on classical story that provides loads of action liberally peppered with humor and rationalism? Enjoy. Looking for the classical Greek myth? Don't watch this or Sam Raimi's 90's TV show of the same name. **1/2 (Two and a Half Stars). Hercules is rated PG-13 in the U.S. for "epic battle sequences, violence, suggestive comments, brief strong language and partial nudity." It is available on Showtime OnDemand.

** Paraphrased/consolidated from similar comments/thoughts J and I shared about the movie.