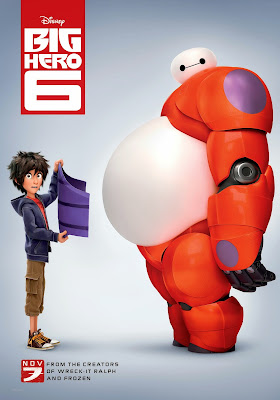 So, J and I had a three lovely nights and 2 and a half days together this weekend. We shopped for and planted my flower garden, cooked and lazed and even gave one another hickeys (yes, "EW!"). We also watched Disney's take on Anime, Big Hero 6, a movie that hit theaters not long after he and I started dating and now available OnDemand.

Hiro (voiced by Ryan Potter) is a young genius bored by school and obsessed with battling robots until tricked by his brother Tadashi (Daniel Henney) into accompanying him to his "Nerd Lab" at a prestigious tech college where Professor Callaghan (James Cromwell) encourages Hiro to enter a contest for a full scholarship. Inspired by Tadashi's health care bot, "Baymax"  ("30 Rock" alum Scott Adsit) and his own Battle Bot, Hiro creates a set of thousands of microbots that can form any shape their controller can imagine. When Tadashi is killed in an explosion at the lab, Hiro gives up his dream of attending school, much to the dismay of his Aunt Cass (Maya Rudolph) and the displeasure of tech millionaire Alistair Krei (Alan Tudyk) who wants to buy Hiro's tech. Hiro soon discovers that his microbots have been stolen and are now being used for seemingly nefarious purposes. Aided by an up-graded version of Baymax and his brother's nerdy friends Fred (T.J. Miller); Go Go (Jamie Chung); Wasabi (Damon Wayons, Jr.) and Honey Lemon (Genesis Rodriguez), Hiro sets on a mission to not only retrieve his invention but to also stop the mysterious Kabuki-masked villain who is apparently using them for revenge.

Based on the graphic novel "Man of Action" by Duncan Rouleau and Steven T. Seagle and co-directed by Disney veterans Don Hall and Chris Williams, Big Hero 6 is a delightful take on both the Superhero and Robot Sci-Fi genres. Baymax (an auto-inflatable health care bot programmed to ensure the well-being of its patients), a delightful, childlike robot with much to learn about the world outside of boo-boos and fevers, is especially amusing when deflating or running low on battery power. Hiro (with his over-sized, Anime-style eyes) is a typical rebellious Disney teen who learns to take responsibility for himself only after a tragedy. Among the supporting characters, Fred (whose father turns out to be - SPOILER ALERT - none other than the one and only Stan Lee) and Callaghan are the standouts.

J and I both thoroughly enjoyed Big Hero 6 and are honestly looking forward to the further adventures of the Superhero team that comes into its own at the end. And certainly (like almost every animated Disney movie), terrific animation, clever jokes and sly references to other genre films outweigh the cliches and tropes associated with Anime; Superheros; Sci-Fi and Coming-of-Age stories. Sit back, park our brain and just enjoy this latest entry n the growing number of non-Pixar Disney CGA films. Big Hero 6 is loads of fun for fanboys and families. **** (Four Out of Four Stars) Big Hero 6 is rated PG in the U.S. for "action and peril, some rude humor, and thematic elements."

PS - Watch for the cleverly hidden Frozen Easter-egg early on at the police station...