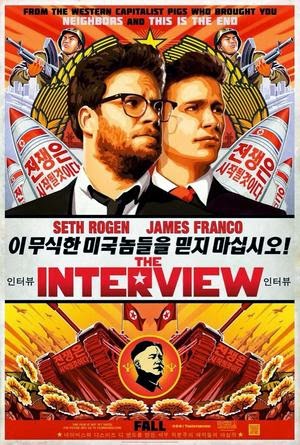 As I am sure you are all aware by now, Sony Pictures has decided not to release The Interview after threats from punk-ass hackers in North Korea. While I happen to whole-heartedly agree with our POTUS that Sony made the wrong choice, they were also faced with their own version of Sally Starr's Dilemma.

In case you've been living under a rock for the past month or so, let me quickly recap. The Interview is a movie starring Seth Rogen and James Franco, involving a talk-show host and his producer who are recruited by the CIA to assassinate North Korean leader Kim Jong Un while interviewing him for his first Western TV interview. And while North Korea apparently had no problem with a puppet version of Kim's father being killed in Trey Parker's and Matt Stone's Team America: World Police, a live-action satire about his son was just too much. Beloved Leader's crack team of cyber-bullies hacked Sony's internal files, revealing awkward emails from execs; personal information and SSI numbers of employees and threatening to bring about 9/11 style retribution against theaters that would dare show the film. After several theater chains decided not to exhibit the movie, Sony capitulated to the hackers' demands and pulled it's release, completely.

Personally, I am appalled that Sony gave in to these ridiculous demands, letting a tinpot dictator  quash Free Speech and Artistic Expression in a country whose First Constitutional Amendment expressly allows both. And it makes no difference whether the movie is good or bad (personally, I find most of the comedies Rogen and Franco have made together to be pretty hilarious - with the exception of Your Highness - even though they can hardly be considered "High Art").

At the same time, I understand Sony Picture's reluctance to be held accountable for any deaths and/or destruction which might have occurred during any screenings of the movie. It is literally a 'Damned If You Do/Damned If You Don't' situation.

Sony has paved the way for fear-mongering asshats to stop the release of any film that might be considered offensive or politically incorrect. If the Westboro Baptist Church had threatened violence against theaters showing Brokeback Mountain or Milk, would those films' studios have backed down? Unlikely. In fact, if detractors and haters had been given their way, AMC's list of the 100 Most Controversial Movies of All Time would undoubtedly not exist and we would never have seen classics like The Exorcist; A Clockwork Orange; Citizen Kane or Lolita, to name a very few.

So, where do we draw the line? Do we give into the fear of retaliation from a despotic regime of a very Third World country or do we continue to be the leaders of Free Speech and Artistic Expression? Do we let the Catholic League tell us something is obscene or do we decide for ourselves what we will or won't watch? As far as Uncle P is concerned, by giving in to these asshats, Sony has added another chip in the wall of Democracy that our forefathers fought so hard to secure. And that makes me very sad.


F*ck you, Kim Jong Un! F*ck you and anyone who tries to take away the freedoms so many Americans have fought for and died to protect. And F*ck you Sony Pictures for letting them do it!