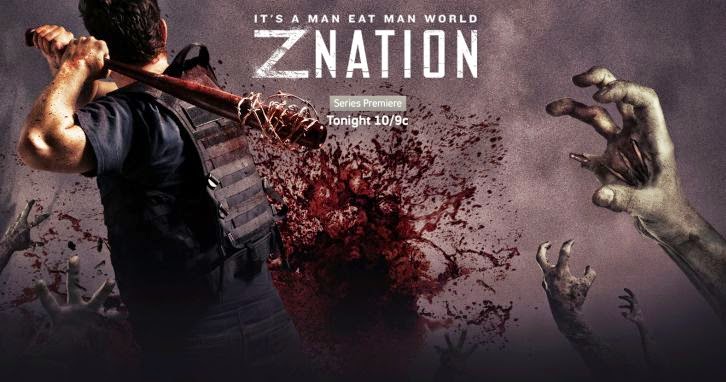 SyFy, in an effort to compete with AMC's blockbuster "The Walking Dead," has debuted their own zombie series, "Z Nation." Set 3 years after the Zombie Apocalypse, "Z Nation" concerns the efforts to get the only known bite-survivor to a virology lab in California to use his blood to develop a vaccine. The survivor in question is a non-willing prisoner participant in a trial study which killed everyone else it was tried on. Meanwhile, at a remote polar military installation, a lone soldier who calls himself  'Citizen Z,' tries to coordinate the effort to get that survivor where he needs to be.

Two episodes in and I can assure you that AMC has nothing to worry about from this shoddily-produced effort. Cheesy CGI, ridiculous dialog and some truly terrible acting are the culprits, despite featuring some seasoned veterans like DJ Squalls (The Abyss), cutie Keith Allen and star Tom Everett Scott (That Thing You Do; An American Werewolf in Paris). Allen, looking particularly scruffy and beat, is the survivor, Sqaulls is Citizen Z and Scott is the guy who has to get him to CA after the guy who was supposed to get him there ("Lost" alum Harold Perrineau) is killed in the pilot (oops - not too much of a spoiler - though to be honest, he was probably smart to collect that paycheck and move on). The rest of the cast is made up of folks you probably have seen before, but wouldn't be able to name if a gun was held to your head.

Created by Eric Bernt (Romeo Must Die) and consequently written by a passel of writers with mostly minor credits, "Z Nation" squanders whatever potential it may have had on really bad makeup and CGI effects that look like they were made on a teenager's MacPro. Personally, I've seen better zombie makeup on my local Trick or Treaters. Most of the cast look like they know they are in a crappy show and seem almost apologetic for it. What a shame...

Unlike SyFy's better original series ("Battlestar Gallactica;" "Warehouse 13;" "Haven"), I really don't see a full five seasons out of "Z Nation." And that's probably not a bad thing. Most of these folks have better things to do with their time and talents. I certainly have better things to spend my time watching, as do you.

"Z Nation" airs Friday nights at 10 on SyFy and is repeated throughout the week, should you have nothing better to do (though I have to imagine - and hope - you must).

Zombie fans should stick with "The Walking Dead," which is about to begin it's fifth season on AMC.

My sister and I (along with many others) can't wait!