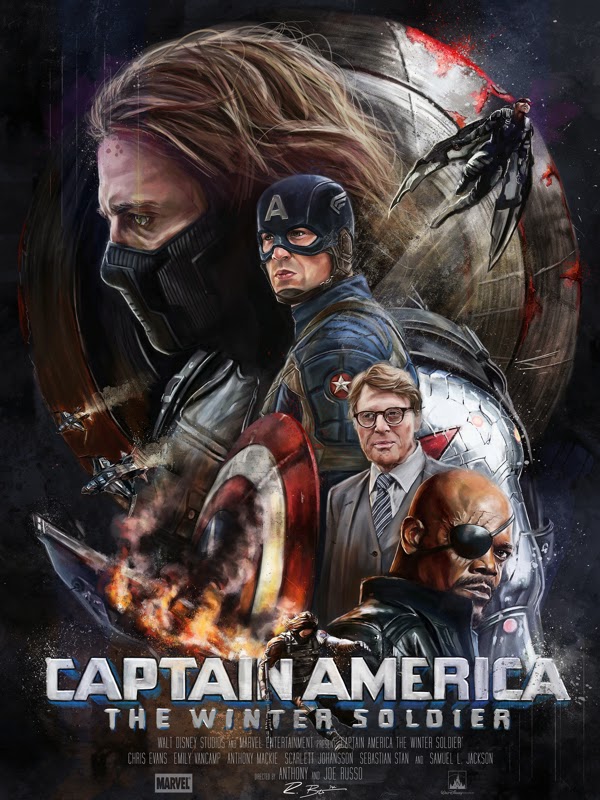 So this last weekend of September (and the first of Autumn) was a very mixed bag, though most of it good. I had intended on writing this review last night while the movie was still fresh in my mind, but the randomness of the Universe stepped in and made my Saturday night into something other than I had planned (I fell asleep and missed a party, but went out later and met a hot, funny and sweet man I hope to see again - yes, we exchanged numbers; I may be crazy, but I'm not stupid).  I worked one of my two mandatory Saturday mornings (7:00 - 12:30) and then went grocery shopping. I knew I had a party to attend, but after the groceries were put away, I had time to kill so I rented Captain America: The Winter Soldier OnDemand. Warning: This movie came out in the spring. There will be lots of SPOILERS!

Captain America: The First Avenger was one of my favorite movies the summer it was released, and I was very happy to find... well, soon. This time out, Cap is once again up against Hydra, who have wormed their unctuous tentacles into the very heart of S.H.I.E.L.D., led by the duplicitous Alexander Pierce (screen legend Robert Redford playing against type and obviously having the time of his life). When S.H.I.E.L.D. director Nick Fury (Samuel L. Jackson) is 'killed' by a legendary assassin known as 'The Winter Soldier' (Sebastian Stan), it's up to Steve Rogers to get to the bottom of the conspiracy. Despite being told by Fury to "Trust no one.," Rogers does trust Agent Natasha 'Black Widow' Romanov (Scarlett Johansson, finally getting a chance to do some character development, especially with her relationship with Cap) and new Avenger Sam 'Falcon' Wilson (The Hurt Locker's Anthony Mackie) who is introduced in an hilarious opening sequence where Steve keeps passing him in a jog around the Washington Memorial Reflecting Pool ("On your left!")

Directors Anthony and Joe Russo (my beloved "Community") have proven they have the chops to make a coherent action film with action sequences which a) make sense and b) can be followed without straining one's eyes. This is exactly what an Superhero action movie is supposed to be, folks! Performances across the board are up to Marvel's usual standards. Of course, while the astonishingly beautiful Chris Evans was born to play Steve 'Captain America' Rogers, he was nearly shirtless enough for countless women and gay men (though that grey jogging T is pretty amazing!). The scene with the now dying Peggy Carter (a heavily made-up Hayley Atwell) was particularly well done. There is also a very Sky Captain-ish appearance by the the fabulous Toby Jones as the computerized mind of mad scientist and Red Skull's right-hand-man, Arnim Zola.

Captain America: The Winter Soldier is probably one of the best of the Marvel films and certainly one of my favorites. If I had to quibble at all, it's that it seems to follow the Marvel formula: Complicated plot followed by massive third act destruction. It may be time to mix it up a bit, guys. Still, it's a solid and beautifully made action movie with loads of all sorts of eye-candy for everyone! One last spoiler: Did you really think Cap and his team wouldn't prevail? **** (Four Out of Four Stars). Rated PG-13 "for intense sequences of violence, gunplay and action throughout."