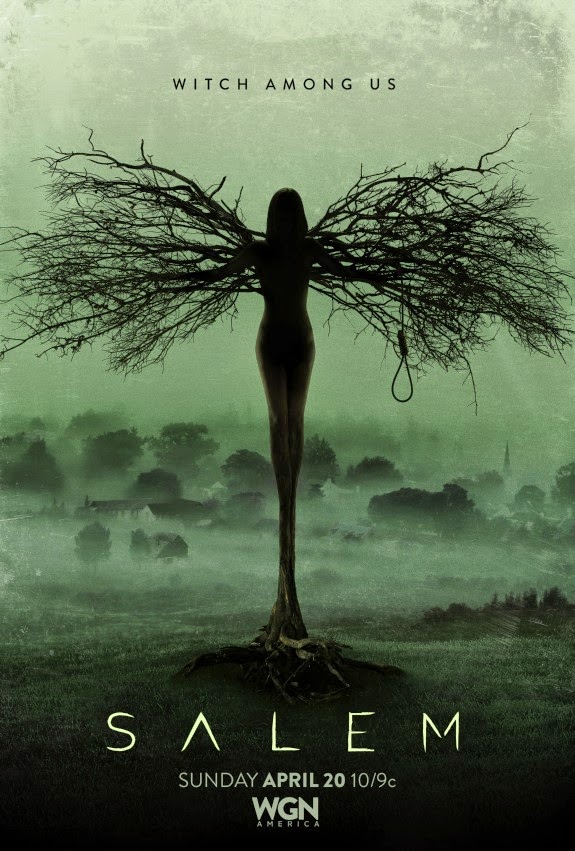 Sometime in the Mid-1980's, Uncle P appeared as Judge Danforth in a rather excellent (if I say so myself) production of Arthur Miller's 1953 play The Crucible. While based on real historical events, Miller's play was actually a condemnation of Senator Joe McCarthy's attempt to paint all artists, gays and liberals as Communists. And undoubtedly, a small demographic of them, were.

Flash forward 71 years. Cable network WGNAmerica has taken the true story of one of early America's darkest bits of history and turned it into an intriguing genre show which posits that witches were/are real and that 17th Century Salem was a hotbed of their satanic activities. Spoilers ahead.

Seething hottie Shane West ("Nikita;" "ER") is John Alden, in love with the beautiful Mary (Janet Montgomery). When the sadistic Magistrate George Sibley sends Alden off to fight in the French/Indian war, he leaves behind a pregnant Mary who asks her servant Tituba to relieve her of her condition. Seven years pass and when Alden returns to Salem (after having been declared dead), he finds his love married to Sibley and the town in the grip of witch fever. Alden's childhood contemporary Cotton Mather (beautiful "Fringe" alum Seth Gabel) is leading the war against the witches, using young Mercy Lewis to point out the witches who supposedly torment her.

While I could find no credit for the series' creator, I must commend the writers for doing their research and incorporating historical figures from the well-documented Salem Witch Trials into their tale. John Alden; Cotton Mather; Mercy Lewis; Reverend John Hale; Tituba and Giles Corey ('pressed" to death by a pile of stones) were all real people who took part in the trials, either as judges, accusers or the accused. Of course, in this fictional version of events, the witches (now led by Mary Sibley) use their powers to deflect suspicion onto other members of the community. In this version Alden is the skeptic, intent on proving the superstitious townsfolk are wrong, even after he's seen evidence to the contrary while still in love with the now evil Mary Sibley (who houses her familiar toad in her supposedly infirm husband's gut).
In real life, the Salem Witch Trials had more to do with land-grabs and power-plays than the supernatural. In the WGN version, the opposite holds true. While I found the series' writing to be clever and original, I was a bit put-off by the acting which seemed rather stilted in deference to the period depicted.  It seemed to me that most of the actors gave over to style, rather than truth, despite the mostly excellent production values and special effects. Still, I can't complain about the entertainment value the show provided and must imagine that those not fully familiar with the actual history will be engaged on a very different level than myself.

Personally, I am looking forward to seeing where the series goes. *** (Three Out of Four Stars)


This is one new Summer series I'll be watching. If your cable provider has WGN (unlike several of my friends and family members), I recommend "Salem" for nothing else than it's high entertainment value.