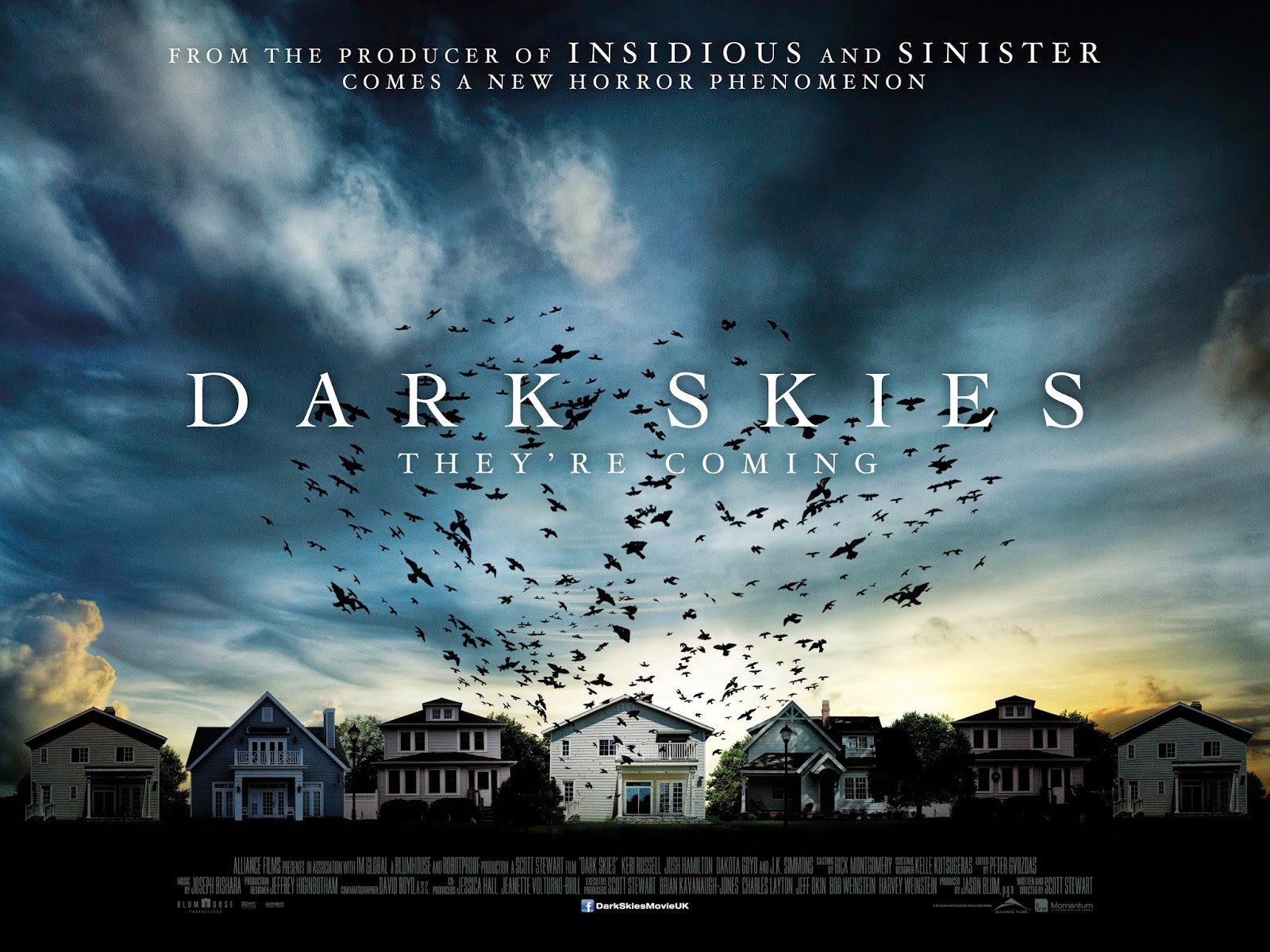 I'm not sure why last year's alien abduction movie Dark Skies bombed. It's not particularly bad (though it does have it's moments). I managed to catch it on cable today and was mostly entertained and mildly creeped out.

Lacy Barret (Keri Russel) and her husband Daniel (Josh Hamilton) are a typical suburban couple, struggling to get by. Daniel is a currently unemployed architect, while Lacy is a realtor in a depressed market. When their youngest son Sammy (Kadan Rocket) starts to have nightmares about the 'Sandman,' odd things begin to happen. There's the Poltergeist-like configuration of canned and boxed goods in the kitchen which appears in the middle of the night; the disappearance of all of the family photos and the 3 separate flocks of birds that commit suicide by dive-bombing their house. Then there are the apparent sleepwalking episodes experienced by most of the family. And let's not forget their 12 year old's obsession with porn and an older, bad-influence friend.

Director Scott Stewart (of the almost good Legion and the terrible Priest) manages to get some excellent performances from his cast (particularly the youngsters), but his screenplay leaves much to be desired. As the weird events build, we are treated to some truly creepy moments. But once J.K.Simmons is introduced as an "Alien Abduction Expert," all bets are off. We've seen this story before, but done better.

Dark Skies has some truly creepy moments and occasionally effective SFX, despite being a Conspiracy Theorist's wet dream. And while this subject has been explored before in both better (Close Encounters of the Third Kind) and worse (The Fourth Kind) films, I still managed to enjoy it, despite it's rather obvious denouement. If you have 97 minutes to kill, there are probably worse things on which you could waste your time. ** (Two out of Four Stars)

Dark Skies is not a terrible genre movie, even if it crosses genre tropes.

I thought it was pretty good until the ending - very weak. The actors playing the husband (yummy) and wife are very likable.

I watched The Conjuring for the third time and it still scared the sh*t out of me. My 25 yo nephew vows to never watch it again.

I thought "Sinister" (from the same team as "The Conjuring") was creepier and better.